Welcome to the chaos hopefully you can block some shots 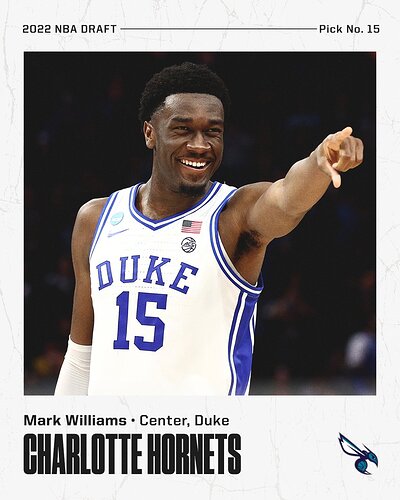 Happy to have him. I like him - probably moreso than Duren - he’ll just always be associated with terrible draft management. But I do really like the pick itself.

The most ridiculous standing reach I’ve ever heard of, with mobility and catch-and-finish ability. A lot to like.

Blocked 7 shots per 100 possessions last year. On the NBA level, Dikembe Mutombo never reached that figure in any season.

With our timetable It’d be nice if he could progress 3 years over the summer.

If we don’t trade him this kid is going to start day one. Got a good feeling about this kid.

If D’Antoni’s the guy, having Melo and Williams in the pick and roll could be devastating. Especially with Miles and Terry on the wings, a rejuvenated Gordon finding the fountain of youth and getting comeback player of the year, Bouk and Kai taking over the 2nd unit, Thor locking folks down… PJ becoming Shawn Marion part 2…

Yes, what does Duren do significantly better? highlight dunks and posing, yes. Freaky athleticism, yes. But MW is very athletic, and freaky long too. Rebounding rate even.

Neither got much game outside of paint.
See from Mark better footwork and IQ, a better chance can play any in space defensively.
Offense, neither very skilled, no range and much threat outside 3 feet.

Duren is a lot better at turnover and missing FT. And has much bigger age upside, was said was youngest player in draft when pick made, 2 years younger than Mark.

I declared my love for Williams back in early March. Thought he would play his self out of our draft range. I’m Glad we were able to come away with him.

One of many good things about Williams is that he’s a good defender and will likely get some good minutes early on. He should be able to make an impact in year 1.

Will Bouk crack the rotation this year - especially if we re-hire Cliff? Anyway, I think we got a backup plan for Bouk in Bryce last night.

The draft was a success. Glad to have M Williams and a 2023 1st round pick! None of that cutie stuff by drafting a SF in the 1st round and we addressed the most critical obviously need. Good job Front Office! We could have used a PG w the 45 pick.

I like this pick a lot, in a vacuum.

Williams is the ideal drop coverage centre. He can hit his free throws and has a crazy standing reach. Seems a good dude too. He can also coexist with Kai nicely.

Seeing Mark hit those threes has me even more excited! Mainly because he’s going to be open for standstill 3s most likely just like those

He’s got nice form on his shot (hadn’t seen the video, so thanks for posting @QC_Thundercats) and I always envisioned him being capable of hitting open 3s. Definite catch and soot, trailing 3 potential.

The only thing he can’t do is guard on the perimeter, but he’s got pretty much everything you look for in a traditional, starting Centre.

I love his standing reach as it means he’s a factor protecting the rim without having to leave the floor … VERY useful indeed as he’ll foul less as a result.

That 3 shot looks fairly quick too.

His feet are slow, but other than that that video looks good. Even with slower feet, he can still be a really good player and factor in nba

Yeah, I’m guessing even though Duren has better defensive potential as a switchable guarder, the offensive polish and range is what put Williams over the top for Mitch. And he doesn’t seem like a stiff, I think a good movement coach, working on his hips and agility drills, he could at least maybe get to a Kevon Looney level on the perimeter, which looked good to me in the playoffs.