Jalen Duren does not show up on ANY of the top 5 center stats. Not good:

Measurements and Data collected at each year's NBA Draft Combine with information dating back to the 2000-01 Season.

Hell at least Walker Kessler showed up on one - height.

Christian Koloko Had A LOT of good numbers.

Kupchak said today that the rookies didn’t play anywhere near as much as he would like. He even said “coaches decision”. He said he lets the coach make those decisions and he had pressure to make the playoffs.

Sounds to me like that would signify a difference in ideologies between Borrego and FO which is similar to what I was sniffing most of the season.

EDIT: the reason I posted this in this thread is because it makes me think that he isn’t as opposed to drafting more rooks as we have thought. I got the impression he is looking to dangle one of the picks in trade and keep the other.

Do they share the same interests? One wants to keep his job and the other wants to prove that he drafted the right person. They have competing interests. So what do you do - default to pleasing the boss. You know he wants to win every night regardless of who is on the floor.

First i don’t talk like that to you.
I will make this easy one more time.
We sign Miles and Martin we hard caped at 149 million
Then thats it we broke in tax hell

I really can’t complain about the guy. I can’t.

As for the combine stat everybody has to try them out. You can get lost for day in them! My opinions of Ochai Agbaji and Christian Braun have gone up. I’ve liked Braun’s bravado since seeing him play. He’s got a swag about him that is legit.

Agree about Braun . Just hoping he falls to 13th

Seems to me that Braun is an overreach at 13 or 15 but curious what you think he does that LaRavia doesn’t do better in any category? I think Jake is a guy we could trade #15 back into the low 20s for and get just to level set.

Sorry I haven’t even heard of him LaRavia . Where is he mocked to go? Personally I prefer Williams so far because of the difference in FT. Williams shoots 73% So he can end games Braun shoots a lower %. Thanks im going to look into LaRavia.

I am of the opinion that if two rookies are added to this roster at #13 and #15, the hornets absolutely wasted capital and opportunity

I would not be so fast to try something new. Hence another reason why we likely kept Mitch - his ability to draft.

Let’s get real about my home state. What free agent wants to come to NC? You are young, rich, super tall (meaning every young woman wouldn’t mind getting pregnant by you) and you are famous. Do you really want to be in NC?! You got NY, cali and heck Miami is booty central!

Building though the draft has worked over the last 5 years and it would be a mistake to turn our nose up at it now. Combine them to move up, trade one for a draft pick next year or use them to draft solid role players. We are fortunate that we’ve been able to cultivate loyalty from our recent draft picks and I expect that to continue.

I doubt that we can get someone really good for those picks. Plus if we did acquire a player who’s to say that he would stick around? Maybe just maybe we can keep Montrez (a NC guy) but we will have to over pay to keep him. Look we overpaid for Kelly, Gordo and yeah Terry (which is heart breaking to admit).

I think we have a lot fewer options than you are thinking.

Right, which is why it’s important to trade away gordon Haywards salary to make room

Jalen Duren does not show up on ANY of the top 5 center stats. Not good:

I don’t think Duren was measured at the Combine.

That’s the thing I still have trouble getting my head around.

You can’t, out of one side of your mouth, acknowledge there was pressure on the Coach to make the playoffs while, out of the other side of your mouth, say you wanted your rookies played more. All while failing to provide your coach with a viable centre or any real defensive help on the roster.

While JB likely wasn’t the HC to take this franchise forwards, he was never really given the opportunity either.

I am of the opinion that if two rookies are added to this roster at #13 and #15, the hornets absolutely wasted capital and opportunity

100% this. With the mandate clearly being for us to make the play-offs, you can’t realistically expect to accomplish this if you use both first round picks on rookies. Combining one of the picks with Oubre or Mason’s expiring contract to trade for a vet makes much more sense. At the very least, trade one for a first next season, when we might hand our pick over to the Knicks.

Dude I’m right there with you. In our range, the only player I’d be interested in in Mark Williams, and I’m not even all that excited. And plus, I believe Mark Williams will be a draft night guy that will end up going a little higher than currently slotted.

If they want to take Mark Williams at 13 and then trade the 15, that’s fine. I’d rather trade both picks, ideally. Ranked situations I’d prefer from most to least preferred:

In reality, the chances of the Hornets trading both of those picks is around the same odds as Gordon Hayward playing a full 82 game season.

Supposedly expectation around the league is that picks 12-40 are particularly deep this year. We have 13, 15 and 45. JUST SAYIN 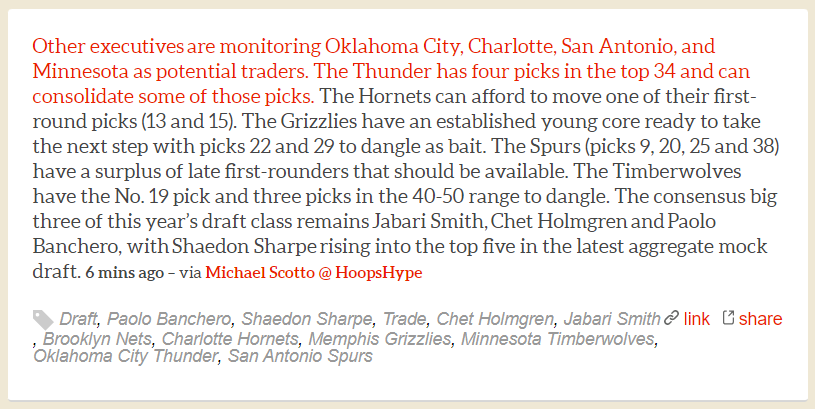