Not true,wojo didn’t say so

This just in: pitino call Jordan to turn down coaching job

mitch has turned the team into a professional basketball team. cho had an analytical method but it just didn’t work (which is fine). mitch has drafted very well in the late lottery and definitely in the 2nd round. he has developed the players that were drafted and signed the right free agents.

if mitch is also fired this smells more like melo isn’t happy and behind the scenes pushing buttons.

Excellent! We are going back to the days of MJ drafting Frank Kaminsky, Jeff Taylor and PJ Hairston! 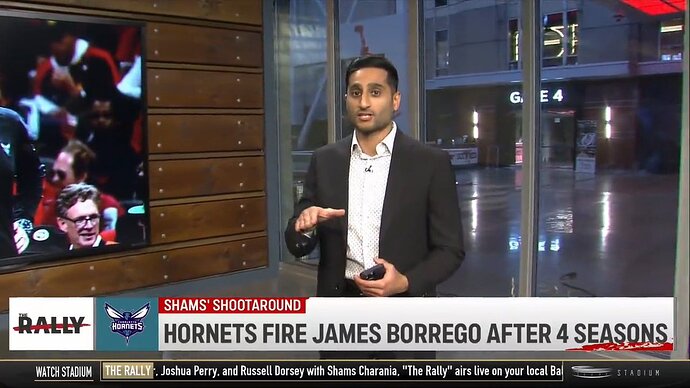 I’d hate to let Mitch go… I like what he’s done. We have some good young talent…. That just never see the floor. I just think they’d be further ahead playing more meaningful minutes verses what they played. I think MJ would be cool losing a little if he sees the young guys we drafted get some burn. It would make us better off and know what we have in the long run.

I have no idea where this team is going? If a 20 year old Ball is running things we screwed. He is no where near ready to determine who he plays with. And who his coach is. MJ and LJ did it in late years but not at 20. I am worried about the organization.

Hell Levar could be our next coach

I don’t think Mitch is being fired or dismissed. The rumor is that he’ll move into a different semi-retired role. I don’t think we need to worry about MJ firing Mitch. It’s Mitch’s choice. We’ll see though.

Do we know what the current state of the assistants? Were they retained and were they also given extensions when JB was?

Don’t know but generally a new coach will want to choose his own assistants.

This is a paychecks question, not a quality of staff one. We retained everyone for a period of time following Clifford’s dismissal, this is the nature of my query. As well as the extension question which might make it moot.

Wasn’t expecting this one. I felt like the continued improvement and player development was enough to warrant one more year for JB. Also felt like continuity would be better for Melos continued development. I’ll be the first to say I prefer to see the draftees play, but that’s because I’m more concerned with the long term development of sustainable success and not so mad at the losing if it better positions us for the future. But I felt like the majority of the fan base (and probably ownership’s) impatient desire to win sooner than later is what forced JB to bench the youngins so I understood it and didn’t hate him for that. He was tryna win now at all cost so he leaned less toward development of the youth to experienced players (to the extent we had experienced players). Not gonna cry over his loss and would welcome seeing the youth play but part of me is like be careful what you ask for.

Definitely hope Mitch remains around. I think he’s made moves to put us in a great position compared to any time in the bocats/hornets era. Even the moves he hasn’t made in hindsight I feel were the right ones. Of course nobody is perfect. I hope this doesn’t lead to wasting our current assets on a washed up overpaid vet to win a few more games now and sacrifice our future, yet again. It will really be interesting to see who the next coach is and whoever it is will be coming with immediate pressure to win so those who want to see the young guys play but also wanted JB gone, will you get your wish? IDK…

According to Rod Boone…

“While ultimately owner Michael Jordan had to sign off on the move, a source told The Observer he wasn’t the man who delivered the edict to sever ties with Borrego, who had two years remaining on his contract after signing an extension in August.

Kupchak has been the architect of the Hornets’ blueprint and that wasn’t suddenly altered this week. He made the choice to let Borrego go, figuring it was a necessity to propel the Hornets’ young core led by LaMelo Ball forward.”

If this was Mitch’s call, I can’t be mad at it. I hope he sticks in to see this things thru. Eager to see his next moves.

This is a random thought. But what would you guys think of Anfernee Hardaway as the head coach? Not sure if he’s ready for that, but he was a beast of a player and I feel the players would respect him.

I would be all for giving him an interview. From what I have heard, he is a hell of a coach and he obviously recruits well in college

But what would you guys think of Anfernee Hardaway as the head coach?

Seems to be a similar tranche as Stackhouse if not a step down as far as breadth of experience. If be more in favor of Stack personally as he’s got more years, multiple nba assistant perspectives, the 905 head coach role under his belt (over Penny). But neither really hits the vet head coach bar.

I feel like it’s way to early to know… but what I do know is that Penny could help Lamelo in a big way… both being point guards and such. I do get that he doesn’t have a lot of experience though. But I still like the fit. It’s just an Idea out of left field I was throwing out there though… trying to think of past players who could work for us.

I get your notion that he might gel well with LaMelo as a guard-whisperer. Looking at other examples, it took a while for Kidd to do both that and propel a team around that guard skill. I think we need more than that.

Regardless of all else, unless the team is blowing smoke by saying they are looking for a veteran head coach, I cannot see how he meets the criteria. To me, this front office has shown they are not willing to quickly pull in on-the-floor help where it’s very apparent the team needs it. That or they just weren’t willing to with JB. Might be something they do respond to with a more veteran coach saying the same thing. Again though, that points to a more established candidate.