Is this shit real? 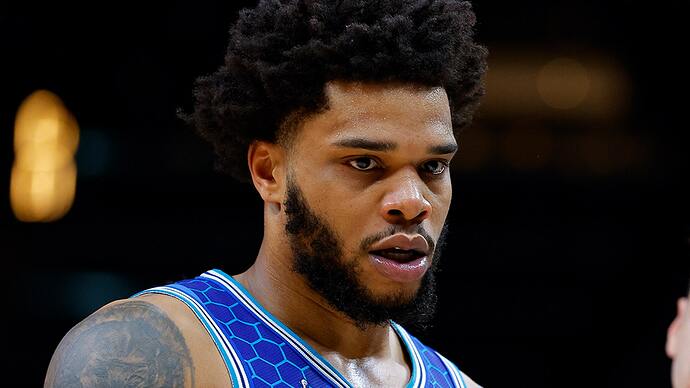 There are two immutable laws of Hornets fandom:

I’m finally fully convinced now. We’re cursed. We just can’t have nice things. I don’t know if Charlotte is built on an ancient Native burial grounds, but wouldn’t be surprised.

I was willing to be blissfully ignorant going into next season, but everything is stupid this offseason. NOW DON’T YOU THINK WE SHOULD’VE JUST DRAFTED AJ FUCKIN GRIFFIN WITH OUR DAMN GIFTED 2ND PICK YOU FUCKIN MORONS!

Well, Good luck to Miles with Free Agency! He can now dream of the max. Maybe they will form Rykers Hoopers with Harrell.

This is literally Miles’ second strike this month. First the photo of what seems to be lean, now this. Not a good look.

You’re 48 hours away from being offered upwards of $150M and don’t have the sense, the restraint to avoid putting yourself anywhere near a situation that this could occur. Judgement doesn’t get much poorer than that.

I’m dumbfounded. I thought the mouthpiece was an aberration. I thought the lean was just unwise immaturity. This shit makes that look different. The woman needing medical attention is fucked up. I hope she’s ok. I hope this wasn’t in front of his kids. I hope he seeks help. My gut response is that I hope he’s not a Hornet.

I felt queasy about Jeff Taylor too. Violence against women (or children for that matter) seems insanely over the line when we’re talking about men with such significant physical size and strength.

I agree with you Eastley, if for any case Mitch was hesitant, it is time to walk away if the allegations are true. A simple show from a build like Miles, would knock regular Joe out!

Shit man… what in the world. What has happened to Miles. I guess he should have just taken that 16 million a season we offered him.

But totally, this is why you don’t throw away a lottery pick like we did.

Do we still offer him a contract at this point? It’ll make him way cheaper correct? Or will it work against us?

Im not proud of the fact that I called it on the Clifford rehire thread… we were one catastrophic event from completing the shittiest offseason ever trifecta. I foresaw an injury or losing Miles to FA… didnt forsee felony DV on the board.

(Not making light of the DV at all. I seriously hope the victim is ok and recovers fully and quickly and if Miles truly did this he is an absolute piece of shit)

Thats why the deal with 13 bothered me so bad. We literally were a play-in team and acted like we were the Spurs during their dynasty… actually, I take that back, they kept their picks and used them. That was more like a Knicks move. Even successful teams dont just punt a lottery pick. No matter who or where it is, it’s an asset, and we traded it for absolutely nothing.

And now here we are. I have no idea what to think. The fan side of me thinks “great, now we can resign Miles for dirt cheap.” The human being side of me thinks, “fuck Miles. I hope he doesnt get another opportunity in the league.” The problem is, this is pro sports. If we dont re-sign him, someone else will and he’ll play at an all-star level if he’s not in jail. So what do we do?

Just pisses me off that dude could stay squeaky clean for 3 or 4 years and then pull this shit at such a juncture in time for him and our organization. You cant possibly be a bigger dumbass than he appears to be right now. Smh…

No team has even been like “hey, I’ll trade you this 13th pick for the 25th pick”. I really don’t think any team has done that before. It’s baffling.

Thats why i am speculating that it had to be about the money and not wanting to pay a prospect money for that slot. It’s the only thing i can think of.

While this is admittedly an extreme scenario, it illustrates why you don’t disrespect the value of draft picks. There’s a reason 'don’t look a gift horse in the mouth’ is a known phrase!

As far as I’m aware we already issued the QO for miles prior to this news.

Thats why i am speculating that it had to be about the money and not wanting to pay a prospect money for that slot. It’s the only thing i can think of.

Agree! Yet more opportunity cost associated with the Hayward signing. Didn’t like it at the time, dislike it more and more each and every year.

Neat to see Rod break this vs ShamsWoj