Seeing as this might not get settled Thursday night at 6pm… Hornets FA (RFA) thread for Miles, Cody, and Jalen.

I think we only need to option Jalen and he gets another year though hr becomes a UFA next year.

I’d very much like to keep Cody up to the MLE price point on a Lambesque deal (3 years).

I just don’t see how miles is worth $25 mil. Terry can win you games at least. Miles is a 3rd fiddle. To me, paying him that kind of money is exactly what the sixers did with Tobias Harris. It is also why they can’t win a championship. Too much money without securing the first and second fiddle.

If he wasn’t a draftee, I wonder how many people would be saying, I hope the hornets can land miles for $25 mil for 4 years?

Sounding like Pacers are going to give him their max offer, which can be as much as 25.2 million year 1.

I will say that while he doesn’t have the late game resume of Terry, Miles has contributed to winning. And I also don’t think he’s plateaued yet. I’d feel less inclined to even give him 25 if I felt like he was all he was ever going to be, but I do feel like he’s still improving and there’s room for him to play into a bigger deal.

That would top out at 108m on max raises. If thats what we’re competing against, I like our chances.

Pacers draft SF #6, hard to see making move based on that.
Pacers have to clear besides cutting cap holds and work cap. We can help sending that first from Detroit & plumlee for Myles. Or PJ for McConnell & a bunch of 2nd rounders

Does seem very Hornetsey though, we paid Hayward 4/120 to come here, Pacers offer less for Miles and we end up not matching

That would be really funny to me if no one offers Miles the max or even close.

Does seem very Hornetsey though, we paid Hayward 4/120 to come here, Pacers offer less for Miles and we end up not matching

One thing that changes the narrative a bit for me is that D Branson clarified the Clifford contract isn’t 3rd year team option but years 1 and 2 are team options. We’re looking to win this year so that makes it all the more likely we pay more than we’d normally expect for Miles.

If we don’t, then Clifford is more of an anger hire than anything with a plan.

Didn’t Miles have the highest win shares of the team last year? I think he contributed pretty well to winning.

We need to treat Bridges as if his shooting regressed last year. Previous season he approched 50/40/90, took quite the step back there.

That would elevate him as a player with everything else he has added to his game.

Perhaps but the hornets weren’t a winner. To me it’s sort of like locking in a 10 seed. Which has been my point all along.

Eastley June 28, 2022, 1:47pm #12
@
#Hornets have picked up the $1.9 million team option on Jalen McDaniels' contract, per league sources. Deadline to do so was tomorrow. Deal becomes fully guaranteed on Aug. 1.

@
Mentioned this yesterday, but the Aug. 1 date is going to be interesting. His contract isn’t fully guaranteed just because Charlotte exercised the option. It gives them flexibility depending on what they do in free agency. Regardless, he’s a cheap option whose value is > $1.9M.
1 Like
Dav June 28, 2022, 3:58pm #13

Where are we cap wize now and how many have signed?

According to this, we have $23.5M. We can sign Miles with that, and Cody with the MLE.

Can’t get to Spotrac right now but that’s likely a negative number. We’re an over the cap team. Should have something like low 30m below the tax. I thought I ran the numbers earlier in the year based on last year’s cap/tax and we had like 29m without Cody or Miles but with Jalen’s option picked up. 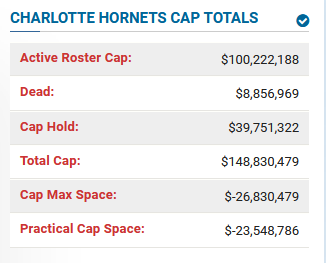 Why hasn’t Nic Batum’s money come off of the books yet? I thought we were done with that mess.

this is the last year of the batum contract

Has anyone offered Miles a deal? Any rumors? I’m going to really have a good laugh if no one offers him a max deal.

Right, that’s a negative number. We’re over the cap and as such will only be able to do trades, Bird rights contracts, exceptions like MLE and BAE, or veteran minimum and rookie contracts. Ergo no real impact for us but our effective “cap” in this sense is that 30ish million under the tax.