I generally am excited every summer league to see the newbies but I am more pumped than usual. I have a feeling on Williams.

I am not saying he is going to be a star. I think the Hornets finally nailed a late lotto pick. At worst I think he can be Capella. And at #15 pay structure for 4 years that is exactly what this roster needs

What I am excited to see is, what are the possible holes in the team with Miles gone. I am hoping this Summer League team shuts us up and give us a hopeful outlook.

Capela with a shot is one hell of a center

Don’t know if it has been posted here but the Scottie Lewis news is devastating.

That is terrible. I mean thinking of the pain alone is nauseating. I feel terrible for the guy. I am not sure what the FO was hoping for Scottie to develop in to. This could be the end of the road for his career.

I hope that this gives us room to sign a prospective PG for the Swarm.

That super sucks for Scottie. I hope he can stick around and heal up fully.

It’s just the first game but I’m pretty disappointed. I had hoped Kai, Thor and even Mark Williams would be dominant. It’s summer league. Instead they all looked raw.

There were moments, but overall not a great first impression.

The Pacers were playing a much more mature team and it showed. Chris Duarte, seriously? Then again, we picked Bouknight well ahead of Duarte…and Bouk’s still a project.

I’m getting big time bad vibes for next season. These guys are Rough. If Nick Richards (3rd SL) is the only one that comes out of this as ready, that’s great for Nick, but not that great.

Also, they should have started Mark Williams. He’s your first pick, show him off. It’s Nick’s 3rd Summer who cares.

Instead we get to watch a Duren slam to open the Pistons game and come off as a bit of a badass man-child, while Williams comes in later in his game and is fairly invisible if not kind of soft for his size (again). We’ll see how game two goes. I need hope.

I agree, we’ll see how it goes, but I’m not liking the looks of it. Generally, when a guy can play, it is very ovbvious. Aside from the one block he had yesterday, and the one jumper, he looked horrible. I cant count the number of times he lost the ball going into a move or where he just got out-maneuvered or out-muscled or just flat out beat to a spot. His much touted size meant literally nothing. I wanted Duren because his game was much more versatile and multi-faceted. Sure he was raw, but a lot of these guys are. IDGAF about how big Williams is, if you cant move, none of it matters nowadays… and i especially cant stand bigs that arent only liabilities on defense, but also cant create even the smallest form of offense for themselves. Sure, all of our guys would look better with a functional PG out there (which i still cant fucking understand why our FO hasnt learned this over the last 3-5 years, and especially after last SL), but if he’s good, it would flash (you know, kind of like McGowens did). It didnt. And here you are, supposed to be the missing, rim protecting piece that is supposed to shift the momentum of games with your sheer presence. Nope… he looked and played small. Really small. And their scrubs were attacking him like he was 6 foot 5.

I didnt want him before the draft, and as i stated, wanted Duren… draft night, outside of McGowens being a good value pick and liking his profile to grow into a valuable piece in the future, literally everything that happened in that first round was exactly what i didnt want to happen after we picked Duren. It couldnt have went any worse. But, then i read some more articles, watched some workouts, etc., and talked myself into this possibly being the better route. I shouldve went with my instincts. I’m convinced PG or no PG, Duren wouldve shown a lot more encouraging signs yesterday with this team than Williams did. Again, I hope I’m wrong, and its one game, but he looked very average to below average, even considering he is a rookie.

Sorry to use your post as a springboard to vent all of this, buy it is just beyond frustrating. And not just the draft, literally everything that has happened of consequence since we picked Duren has been abhorrent. Clifford coming back, Miles being a fucking idiot, this assembly of another shitty ass SL roster with no PG, Kai still having the coordination of a baby giraffe anytime he has to do something other than dunk or block… and then we get to the fucking game and after all of the hoopla and his bullshit ass defense about whether he actuallly plays young players, and then BAM! The Clifford regime is confirmed back in full force, baby!!! Further evidenced by the fact we gave Nick Richards significant, if not the majority of the minutes last night in his third fucking year in summer league. The dude balled out when given the opportunity in the actual league last year, why tf is he even in Vegas, let alone taking minutes from the rookie we just drafted, who was taken to supposedly be impactful???

Our organization cant get their heads out of their asses. Plain and simple.

And p.s.- i dont mean to be hard on Kai, i think he can be electric running the floor and playing defense as-is, but to not see any improvement in his finer motor skills after a year of NBA coaching was very disappointing

ever since the play-in game this team has done nothing but dissapoint. tournament, miles bridges,Coach hire,draft,now summer league. I feel like my natural optimism of being a fan of this team has faded. Someone talk me off the ledge

Deflating and sucks. Bouk & Lewis injured…and no #13 pick. That guards and wings matchup and we only lost by 12?

Crutcher time to shine…did not. McGowens does have offense talent , get defense & IQ make a roster some day. Bigs you can see talent, and the minutes limiting weakness.

I wanted to not guarantee Nick. Not just suck, his last year & other longer termed. And 4th center on roster with 2 other project.

But when drafted this is first year Mitch said realistically expects Carey & Nick play, actually more broad realistically all 2nd rounders, getting a Devonte and Cody not the norm.

Nick has to finally be competent enough to justify that roster spot. Need to get McDaniels-like 3rd year jump Mitch referenced.
-12 when on court
Pace and score killing -8.6 points, offense not a difference maker
But cannot be our worst defensive center giving up +5.3 pts.

I personally dont like Liangelo Balls game, but with the lack of playmaking, and his off-season focus on it, I want to see what he can do. Let’s hope that he can be efficient so that he could get a 2-way, which would make Lamelo happy imo.

Maybe the only thing to alleviate that showing (besides Bryce):

Big men don’t normally do good in summer league, guards and wings will be more dominant. Also, since our guards are awful, it will look even worse for all involved.

Also, summer league is filled with not just the promising high draft picks, but also a bunch of try hard hacks desperate to make a team, so the physicality and disjointed mess will be higher. Will be nothing like a real game.

So maybe those are the ameliorating factors for our larger people on the team.

As for Kai’s shooting, maybe the 10 3’s signifies that maybe he’s been nailing them during practice, and I know the biggest thing confidence wise is to actually keep firing them up during the games until they start to go on and you believe. Lamelo’s first game he was like 0-10, I remember the trolls coming out hard then too.

It’s just the first game but I’m pretty disappointed. I had hoped Kai, Thor and even Mark Williams would be dominant. It’s summer league. Instead they all looked

Please throw Bouknight on to that pile too. Playing more inexperienced “upside” guys is going to lead to the opposite of what we are trying to do - win the division.

Disappointed and sucks. Injuries and no #13 pick, guard and wings outgunned. How only lose by 12.

Crutcher, I rave a little about you do this? Need a big time rebound or get rid of…we’ll guess cant with few guards.

NR our 2nd round center project needs a big Jalen-type 3rd year turnaround to justify roster spot on 4th center, a couple are first round center projects.
The Codys outside norm, Mitch did say when drafted Vernon and Nick realistically if ever happens, 2nd rounders aren’t playable until 3rd year and, until 2022-2023 for those picks.

tnhornetsfan July 10, 2022, 1:10am #39
@
SUMMER LEAGUE INJURY UPDATE: @hornets forward LiAngelo Ball has cleared health and safety protocols. He has re-joined the team in Las Vegas and will be at practice today.

Some good news at last!

It gives me no pleasure to drop the Manek advanced statistics hammer - but my hand was forced: 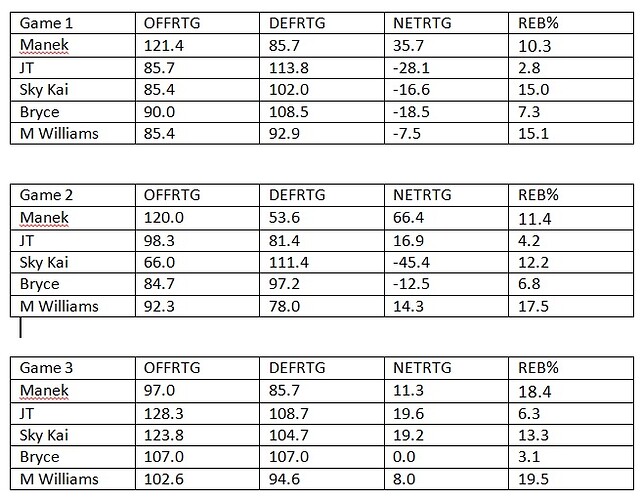 Manek is earning himself a Swam roster spot. Don’t look now, but we got an additional second round pick for nothing. We should be happy with how he’s working out so far.

Not to invite a full fledged argument but