Roster is announced. Let’s see what we can do. 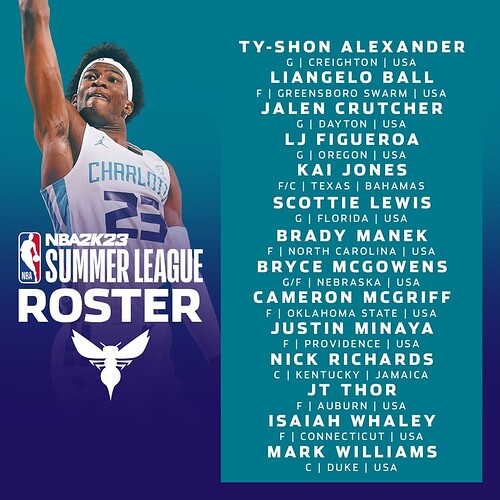 We must be trying out Nick Richards still. Lol. We legit still don’t know what he has haha

Any decent point guards among that lot?

Last year’s summer league was a waste of time due to a lack of one.

Disappointed F Kulboka not back
…McGowens sign 2 way seemed a Lewis replacement, but still in mix for other spot

Said Nick had to go after Mark pick upgrade and likely last week with team.
1.7 million Full guaranteed 7/7, 7/8 first summer game. Possible we talk into extending guarantee due date past pre league summer practice to games, but either really interest as we now have Kai & Mark?

Nice take as usual. I was upset Kulboka is not here as well but he IS playomg with the National team so maybe he will still be on the Swarm.

Thanks for starting this topic!

Scottie still on the team? We should have drafted a PG in the 2nd round last year and this year! This whole 2 guard filling in as a back up point guard plan has not worked and will not work. Last year this non-plan plan lead us to I Thomas and hurt our post season aspirations.

Stop triple skimping on the back-up PG position. With Miles gone we might as well start grooming a second rounder or fringe free agent over the next couple of years.

Looks like Manek is our top rated undrafted free agent. Hornets and Panthers sleep on undrafted kids each year! NBA undrafted free agents are like getting free 2nd round draft picks after the draft is over. There is value to be found especially if you want to save some money like us.

Player to watch out for Manak . This kid could make the team and coild contribute day one .

I think that the best way for him to make the team (or the league) is to try to make it as a jumbo SF instead of a PF. If he can’t get faster then he needs to work on his defense to have a better chance of sticking. I feel like we got a late 2nd round flier w him.

His game to me is old time . He reminds me of a very poor mans Bird with flashes of old time . He is kinda slow but knows and plays angles real well . He all so plays with a edge you score on him he will come back and score on you. A very good shooter from three midrange and around the basket. I think gms undervalued him because his age and speed. But at 6,9 he should be able to get his shoot off.

I just don’t know if he’s quick or athletic enough to make it. He’s a good but streaky shooter. As a unc fan, I’m rooting for him.

Watching him get abused by bigger players on the block was sad. When bacot went out, manek slid to the 5. And it went awful.

I f he does make it he will have to play the four.

You thinking he’s too slow for the 3?

Seeing Kai buff makes me optimistic. Hopefully Kai and JT will drown out my Miles sorrow.

Manek at 3? Way too slow to guard NBA small forwards.

Manek at that elite camp in May we saw all that skill set you guys talked about.
And Body needs a lot work.
Would like to see play for Swarm, but Greensboro, oklahoma, or other should make a g league team somewhere.

I think Brady is gonna find his way into the league. He kinda reminds me of Cam Johnson in his role at Carolina, and could carve out a niche, at least offensively the same way.

He’s a legit 6’9, with a pure 3 ball that is extremely quick on the release. He’s actually more athletic than he looks - he had several one handed put back dunks throughout the year that kept catching me off guard. His defense is definitely suspect, but while he struggled with Paolo the first game, the next couple games he held his own when he was switched over. Don’t know if that says more about Paolo or Manek.

But an automatic knockdown deep threat at that size, relatively (sneaky?) athletic, good rebounder, unafraid of big moments, high bball IQ, plays hard as shit and is really passionate on the floor. Don’t know if he makes the team, but I’d love him on the Swarm and think he’ll be playing in the league sooner than later. Maybe he could be like an athletic version of Joe Ingles.

Check the highlights, he’s smoother than you realize, and when he’s cooking, it can turn a game.

The more i watch him the more i like him. I hope he works his way into a two way with us . His shot is so pure from three.

I watched him all season. I think he’ll have a great overseas career. I could see him bouncing between the g league and NBA rosters or on 10 day contracts. He’s gritty for sure. Huge Carolina fan here by the way.

I thought the same, he will make a great career in Europe, worried about his lateral quickness for NBA.

One more day - one more to soothe the pain of the off season.

Yea, lateral quickness does seem to be a key separator between Europe/G League player and NBA player.