This doesn’t make sense. If the spurs trade Murray, it seems to me they would be rebuilding. Collins doesn’t fit that mold. It seems to me a team like the hornets could be a perfect 3rd team or even the thunder

They are rebuilding but that doesn’t mean that you have rebuild w only inexperienced 1st, 2nd and 3rd year kids who are going to lose 55 games a year. Looks to me like they are trying to skip a few steps ahead.

I’d rather keep Murray if I was doing that

Eastley June 27, 2022, 7:24pm #145
@
In talking with multiple sources around the NBA, many believe Hawks on verge of trading for San Antonio's All-Star guard Dejounte Murray - However, it's looking like John Collins is not part of deal. Would be Gallo & multiple 1st round picks. Spurs prepping for future & '23 draft

This would upset me if they were able to do this. From how relatively cheap they could get Dejounte to how much I’d hate to have to play them in our division.

Yeah w Murray they will be able to punch us in the face even harder next year. How did the Hawks pass us so easily?

Spent a bunch of money a few years ago and their best player rose to the occasion.

Oh this is tasty 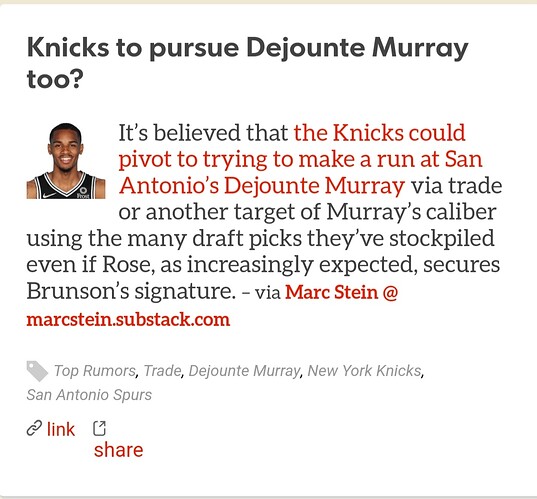 I really do hope Charlotte at least explores the tpe/space market for Hayward but much more realistically Terry in order to really explore long term roster creation and flexibility.

This could be a unique time in which to unpaint yourself out of a corner. Right now it isn’t a dire situation but it could become one with another mediocre season.