Terry established himself as a leader and played himself into a 20 million dollar contract. Bouknight can’t crack the rotation because he’s not that good. Why is their a “choice” between them? In fact it’s legitimate to ask if Bouknight belongs on an NBA roster. I’ve been unimpressed w his “upside” so far.

I do wonder how high Bouknight + our picks could get us in the draft. I wonder if we could get a top 5 pick for that? Would that be worth it?

That said, we are winning the lottery, so the idea is moot.

Oh I agree there’s no comparison in current ability or the professionalism/leadership that’s been shown thus far. That wasn’t my point.

The choice is over salary and/or fit.

Maybe we are going to reset and shed salary? Then the choice would be Bouknight.

Maybe the assessment is that Terry isn’t a good fit between Ball & Miles and they don’t want to pay his contract for a 6th Man, which is my thinking FWIW. Then the choice would be Bouknight.

If the thinking is to go for it and make some noise in the playoffs then Terry clearly stays.

That said, we are winning the lottery, so the idea is moot.

This is the first one I rolled a couple of nights ago…. Will this be ok? 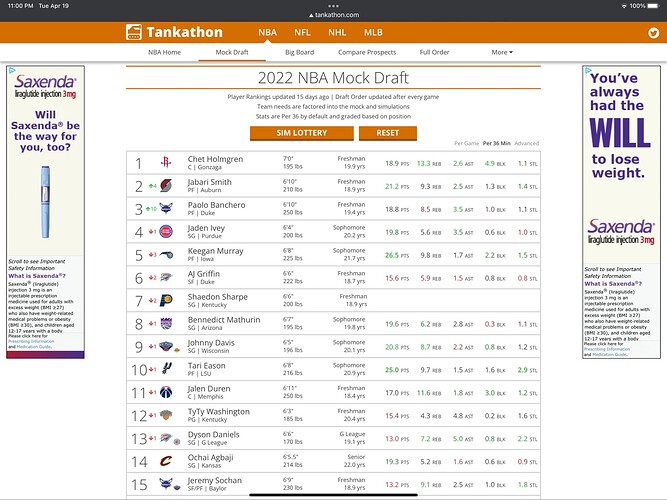 Would not say no to any of the top 3 guys.

What i see is the top three as the top tier. 12 in the next tier. Then a drop as to what you prefer. It will turn out a better draft class than we think. With a few stars sprinkled In through both rounds.

There will for sure be a star where we draft, but no one knows who that will be. But maybe we will get it right.

It took me about twenty tries but I got there.

Understood and that makes more sense w your explanation.

That is what I’m talking about! A huge problem solved w just one bounce! If Duren falls then we won’t need to get lucky. I would love for us to go: C, PG and shooter if we don’t get a lucky bounce. Or PF, C and shooter if we get a lucky bounce. I would really like to see Duren, M Williams and a PG or SF/SG w our three draft picks. I fear Duren will be gone before 13.

100% against picking Duren. The guy can’t shoot. I’ve seen people talk about his D … that’s fine, but the guy isn’t a 2 way player. I’ve seen comments about how he’s like Marcus Smart. No, he’s not. Smart could actually hit free throws, a key measure of a guy’s shot translating to the NBA. Duren can’t hit those either. AND, now that Borrego is gone, it’s likely that the team will pivot more to win now mode and it will be harder for young guys to develop, making it even less likely that a guy like Duren would actually work out with the Hornets.

I don’t know if you realize this or not but you just said to me that we are going back to the days of drafting the likes of Frank Kaminsky because Jordan will be convinced that we are just one over the hill, no upside senior away from playoff relevance. That should make us all sad.

As for this Duren kid, if he can dunk and shoot from 3 feet away then he would be a huge upgrade to the roster. Relying on PJ as a C is just a terrible joke. Plumlee has been about 60% effective as I thought he would be. Do I have to even mention Nick? C is a critical need. I would love to see Duren AND Williams drafted along w a PG in the second.

I would love for us to create a pole . One for the 13th pick and another for the 15th pick. To see if any gets both right and or predicts a trade and for what. It would take a mod to do this but it might be fun to see who comes the closest.

I would love for us to create a pole

Once we whittle it down to 4-5 candidates for each draft spot, we can create polls for each pick. Would likely be post-combine when we start to get some consensus around the range we pick (plus wait until the lottery to “know” we aren’t picking top 4).

Thanks a lot it should be fun

Ncborn, my win now comment was in no way intended to say anything about what kind of player Mitch will draft. It’s more a comment on what kinds of players will probably get playing time for the next coach. We saw that this year with Bouk. A developing team would have played him even if it meant games lost. A team trying to win played IT instead. No judgement implied here, just what I think in terms of likely PT next year.

What I suspect will happen this year is that one of the first round picks, and maybe the 2nd round one will be traded away. I personally like the idea of drafting three guys, but it’s a numbers game. The team currently has 11 guys under contract, 4 free agents (Miles, Montrezel, Cody, & IT), and 3 draft picks. Something has to give. Maybe it will be letting go a contract that’s only partially guaranteed, like Jalen McDaniels or Nick Richards, but I’m not sure we can count on that. I find it more likely that the team tries to upgrade with an experienced player at SG or C using one of those draft picks & a player - also potentially opening up room for free agent signings too.

As for the Kaminsky comment - I don’t expect Mitch to draft like Cho used to regardless of whatever else is in play. Mitch doesn’t bat 100%, but his overall track record is much better than Cho’s ever was.