My assumption is that Cody has played himself into a contract we won’t match and that a player like Ochai is ready enough to be drafted to replace him and possibly an upgrade as a shooter.

Yes Cody will ask for more money and we WON’T pay him. Its now or never and Cody should bet on himself. Heck look at how things worked out for his brother - better than any of us expected! Cody knows what is up. This is another reason why its critical for Bouknight to step up - the team NEEDS him.

I don’t expect Richards to be around next year either. And if we sign IT to another contract, then I will toss my computer out the window. It might be possible to get TyTy with the 15th pick. Not sure why we would keep Scottie either. Cody, IT, Scottie and Richards are all draft replaceable so we have options!

We already have a shooter in Gordon.

A quick glance at the big board on Tankathon, and I’d be pretty happy with any two from this group. 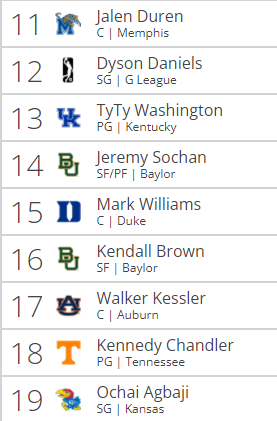 My order of preference would be different, but there will be some good options for us if we stand and pick. Going by who’s available, according to this big board, I’d select Sochan at #13 and Agbaji at #15.

I’d like us to get a strong (edit: not “string”) wing defender with a decent outside shot. I don’t want to draft any more centers. We’ll need to get that via free agency/trade.

What?!?!?! Not even that block headed kid from Duke with the bad front hair line? He would save us a TON of money by forgoing free agent PFs (ie Montrez). He would solve our PF problems on day one. That is why I dream about a top 5 pick. Miracles can happen - Melo Ball - he actually fell to us. Never lose hope.

Heck I would even take that super skinny kid out of Gonzaga. (Even though Shawn Bradley comes to mind.) They say that he has a computer brain. Anybody in the top 5 would work for us. This is what makes the time up until the draft exciting.

A 2022 Love Story of the Unbearable Melancholy for A Wayward Draft Pick:

“…Through conversations with NBA personnel, it was clear that Portland staffers were working under the assumption they would have two lottery picks at their disposal. The Blazers’ interest in trading at least one of those picks to acquire Detroit Pistons forward Jerami Grant has been one of the worst-kept secrets in NBA circles. “That was a big deal to them,” said a Western Conference official. “The expectation was certainly, ‘Once we get this pick, we’ll turn it into someone. We’ll overpay to get someone.’”…”

I tend to agree. Our need is for a starting Centre.

That being said, I would not object to a reload year if we can’t get one. In this scenario we’d play our youngsters, draft with our picks and store enough ammunition to either try again next year or witness Kai or a draft pick emerge as the answer.

agree if not used in other, provides opportunity long term to Redraft and Load up after Ball picked

I completely get the “no more rookies” mindset, but for sake of thread, I’d appreciate more thoughts on incoming rookies and other thoughts on trading picks going in the “Off season changes” thread or a new thread.

Thanks for those commenting on players.

St John SF Julian Champanie just to hear what Eric Collins comes up with
?
how do you do, a LaFrance Champagne for you!
?

I am all in for a defense-first wing like it appears Eason and Sochan are. If Agbaji fits that mold, I am totally up for him too (though wonder if that would be telling on Bouk’s future)

At best, they compete and we figure out roles for them or trade one for something else we need. At worst, one is insurance for the other. It does make things more cloudy for Bouk’s development though. Agbaji just seems like more of the spot up shooter that would fit nicely along the rest of our guys.

We just need to add Bouk and our picks to trade or move way up.

My wife rarely watches basketball but she watched UNC-Baylor with me and mentioned well in that she really didn’t like the guy with the bleached hair. He was pretty annoying. That was Sochan. At the time had never heard of him. No idea he’d be a lottery pick lol.

He’s a tough player for sure.

He was pretty annoying.

To me, that’s the exact archetype we are missing. A Marcus Smart type.

Who is the best 3and D guy we could get?

This draft is low on 3&D guys. He’s basically it in our range. Came on leaps and bounds in his final year. Has a nice wingspan and is pretty much ready to go.

In terms of roster fit, as @dnbman said above, Agbaji likely takes Cody’s place in the rotation. Agbaji would fit really well between Ball & Miles, in terms of his style of play and skill-set.

*Tangent Alert! I think the decision that needs to be made is, pick one of Terry or Bouknight. Both are ideally suited to 6th Man roles and neither compliment Ball in the starting 5. Maybe, with a new HC incoming it doesn’t happen in the off-season, but I do think it needs to happen.

The more I look at Sochan the more I notice the subtleties of his game. He’s a good passer and has high BBIQ to go with his hustle and D ability.

I’d love to pick him and have him guard the opposition’s best Forward. I’d love an equivalent Guard and that’s why Dyson Daniels also peaks my interest (as well as the fact he can run the second unit).