That’s what I think as well GW. This “start Melo or bust” argument will get to bananas state but I think it’s the right call.

He did start second half

the Bucks would try to blitz us from the start, but would not be surprised we win a hard game we’re not supposed to, like we normally seem to do.

Not trying to be the arrogant bastard who quotes themselves, but uhh… I just always get this sense before the Hornets live up to their nature by finding a way to beat good teams, or blow games to the scrubs.

This clearly follows the rules of Hornets law - this is the set up to make you feel good before they pull the rug out on you. Watch - if Miami has Butler, Bam, and Herro sitting out, we won’t beat them.

But that game had me hopping out of my seat at home. Theres no telling the trajectory of Ball, but his impact on the game seems to infect everyone. Guys run just a bit harder when he’s on the court. They seem to pass better, trying to mimic his ability to hunt for the open man. His defensive instincts in the passing lane causes a few turnovers a game, and he seems to have a good nose for the ball.

Theres plenty of rookies that can look good at times, before plateauing in later years, but from my observation, the true stars show more frequent bursts of excellence throughout the season. The more breakout games a guy has tends to show they have the ability to take over and control the game on a consistent basis. Melo has been busting out frequently enough to take high notice.

Another thing the true stars have is they lack the lackadaisical gene, they can’t help but operate at full steam ahead. I’ve noticed Melo always having a nose for the ball, not being afraid to crash the boards with the bigs, running down guys on d, jumping on loose balls. Plus the cold blooded confidence to close things out. These are the ingredients man, they’re there.

Oh, and this is going on the big mural next to Terry’s durant poster: 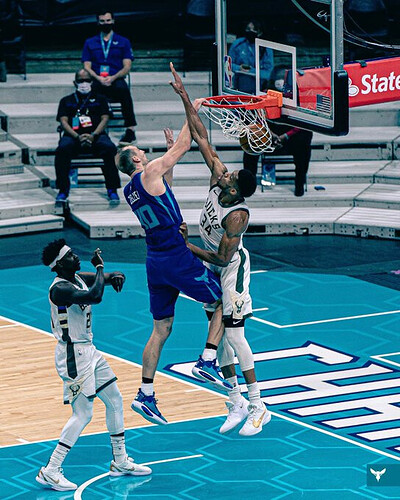 If you weren’t watching that was Eric Collins hysterically reacting to Giannis taking a corner 3 late in the 4th quarter. Dude is hilarious.

Moving on with unintentional comedy; LaMelo (and Monk) had so many sick plays in this game that I was just laughing out loud at the TV.

I also seem to be having personal conversations with Cody Zeller a lot during these games. It’s been a long ride.

Any word on terry? Looked bad

I’m guess that was a 3-4 week ankle injury. It was high and it was ugly

They said he was able to put weight on it. Hopefully only a week but could be more. Looked bad for sure.

I have no expectations for this season. If we sneak into the playoffs and make some noise it would be amazing, and if we don’t make the playoffs and are mid-lottery in a strong draft (if it really is that strong…), I would be satisfied.

That is really the reason I am down with moving Lamelo into a larger role RIGHT NOW. We have nothing to lose, and everything to gain. In my eyes, he has shown enough flashes to give him the keys to the franchise and see how high we can fly with him.

Also, don’t underestimate the impact that Lamelo will have on free agency for us. Who wouldn’t want to play with someone that gifted at setting up teammates?

Boys and Girls, it feels like the Charlotte Hornets are about to go on a little run here over the next several years, and I can’t stop pinching myself.

Devontes advanced stats are actually pretty impressive (defensive stats for him are really surprising), so I’m not one of the kick Devonte out of the lineup guys.

These next few games with Terry out (if he is out) will be the deciding factor for the whole Start/don’t start Lamelo debate. If Lamelo plays 30 mins a night and leads like he did last night (or in that ballpark), it will be impossible to send him back to the bench. We are obviously at our best when he is at his best, so we need to create an environment that allows him to be at his best most often starting right now.

Just my thoughts, and obviously this is uncharted territory for all of us with a guy this naturally talented on our roster, but IMO it is time to take off his training wheels and let him eat.

My caution around moving Ball into the starting line up is two fold. One, I really like the dynamic of him coming in with Miles and the tidal wave of every that brings. Two, and this goes to my Monk comment in the season thread, once you insert him there, it’s extremely difficult to reverse that. In both cases, exhaust all other options first.

I’m kind of with you. I think starting is overrated. As long as getting plenty of opportunities and playing meaningful minutes (enough to make him a front-runner for ROY), I don’t think it’s an issue or limiting him. If he’s playing well, there’s really no rush to move him to the starting lineup. I also like how he changes things once he enters the game. If the starters are playing well, then it’s just one more thing the opposing team has to deal with in the dynamism of his game. If they’re not playing well, then he can provide a significant momentum change.

Certainly, he’ll need to be a starter at some point, but I think it’s probably fine for him to come off the bench this year. He’s got plenty of respect from virtually everyone, and he’s playing meaningful basketball.

I agree with everything you said, and I want to be clear. I don’t care whether he starts or not, as long as he gets lengthy stints in the game and plays 30 mins or so a night.

HOWEVER, the media buzz is building, and we don’t need that constant outside notice either, particularly for a team that is used to outside noise being RARE, now it is a constant.

He has earned an ever larger role now, and hopefully will play 30 mins a night moving forward.

But Lamelo starts for this team next season, and there is no way around that.

I think generally, there are two big considerations for throwing a prize rookie into the starting lineup.

From what I’ve seen, Melo has none of these issues. He seems pretty humble and soft spoken, and buys into the team concept. Acknowledges his own flaws rather than finding a scapegoat, and easy to give credit to others. He also exudes a confidence that he knows not only that he belongs, but that he can excel and do pretty much what he wants to on the court.

Bad games don’t seem to dent his confidence, and he always bounces back like a puppy after slamming his head into the wall trying to get the tennis ball, and bounding back for more.

I have no problems with him as a starter, and I think with his high bball IQ and innate feel for the game, allowing him more game situations and experience will allow him to put more pieces together quickly in learning what works and doesn’t work, and probably accelerate his growth.

Sorry if I jinxed Melo for the next month though…

The very last thing you want to do with someone like lamelo is cater to media and buzz.

You have to factor in his dad and how that will or can impact his behavior.

I am not in favor of him starting. I don’t think he is ready and I can see the formation of some bad habits. Last night and indy games are great examples. Brogdon and jrue would have eaten him up early, probably gotten him in mto foul trouble and generally overwhelmed him. By not starting, he got to come in against divencenzo and mcconnell

I love the built-in drama and expectation of LaMelo entering the game at about the 7/8 minute mark. It’s hot.

I just want to add in the caveat that this is for while Terry is out. Terry should not lose his starting role because of injury. Once he’s ready he should go back.

But the caveat to the caveat is, if Melo starts putting up rookie Luka numbers, and is putting up a series of triple doubles, then you may have to reevaluate the best rotation. Like, the way he controlled the game and imposed his will against a top tier Bucks team, thats not normal for a rookie. He made 3 great defensive plays at the end that broke the game for us. The question is how best to cultivate that talent in the right direction.

The very last thing you want to do with someone like lamelo is cater to media and buzz.

I agree, but I also don’t think Mitch and Borrego are the type that care about media buzz. But his passing and playmaking are worthy of buzz, and along with Gordon’s play and Miles’ hammer dunks, it feels good to start getting attention from outside Hornetsplanet.com.

You have to factor in his dad and how that will or can impact his behavior.

I actually don’t recall even seeing an interview or quotes from his dad. Maybe Lonzo was a good buffer to get the craziness out and see how the league/media reacts to his dad. But maybe since they made it into the league and are grown men now, he’s letting them carve their own path. Now LiAngelo is the one that needed his ass kicked for his overseas shoplifting, but he was never gonna be in the league more than a breather anyway.

Brogdon and jrue would have eaten him up early, probably gotten him in mto foul trouble and generally overwhelmed him. By not starting, he got to come in against divencenzo and mcconnell

I don’t know. He’s closing games against these same starters and doing fine, so I don’t think he would’ve been overwhelmed. Maybe a couple cheap quick fouls is a concern.

I hear you about the bad habits. Maybe its my glass half full thing, but I don’t see the tell tale signs of a diva (Edwards would have me more worried). And, with no proof on my side, he seems like he has the analytical type mindset, where he’ll study film and tendencies, be receptive to mistakes pointed out by Borrego and teammates about what he’s doing wrong. In a way, he almost has that same type of demeanor that Kemba had, of knowing they’re good, but trying to downplay their play off the court, while being strong willed and confident on the court.

I am not glass half empty. More like concerned parent who can see what lies ahead but still wants their kid to walk through it. Just once prepared and ready.

I hear you. I know you’re not a cynic like Larry Brown or Brother Dave (where’d that guy go anyway).

This kinda reminds me of the good old BobcatsPlanet days when me and you had that short term blog debating Kemba and everything. Then the kids came…

If I’m hearing you right, it sounds like Malik Monk needs to slide into that starting role.

I will die on this hill. I don’t care if anyone joins me or not.