Harden trade would suggest they have some real possibilities of dealing Westbrook too, no? Not to suggest we’re a trade partner, but just throwing out there.

The Stein article is pretty terrifying for the “please not Westbrook” club.

I don’t think there’s anything to the Cleveland package, but they do have the 6th pick. Just saying.

Yeah, I think he’d have to be the best player we’ve ever had, even if I like LJ and Mourning better.

It’s easy to forget how absurd averaging a triple-double is in these days of video game scoring. 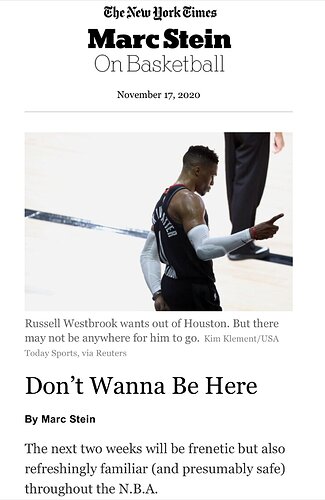 There is belief in some league corners that the Hornets’ desire to trade for Russell Westbrook could increase if they miss out on LaMelo Ball in Wednesday’s draft That and much more intel in the latest @nytimes On Basketball newsletter freshly dispatched to inboxes worldwide:
Eastley November 17, 2020, 11:00pm #68

That tweet you quote above gets at the gist. Says many league sources believe that if we whiff on Ball at #3 pick, MJ pushes in for the Russ trade.

I wonder if this kind of shows that Mitch is a high quality GM. Sent a bunch of smoke about being all in for Wiseman (even trading UPPP!!!). Now its Ball or bust. Strong interest in trading. So now, any team with interest in making a move, is going to call Mitch. Offers must be rolling in from all over by now.

I wouldn’t hate an edwards + russ in batum, terry out weekend.

Just saw a report that Washington is also engaged with HOU and offering Wall for Russ. They’d get some degree of star power back if they did that deal and don’t walk away empty handed.

Yeah, but that’s possibly a worse contract to take on with little reason to believe it moves the needle for you.

Agreed. We give them more flexibility moving forward. Either way, I feel horrible for Stephen Silas.

He might even be aiming for Edwards and putting out that they’re looking for Ball, hoping that either Edwards or some other player they like is still there at 3.

I feel pretty confidant that MIN has no need for Wiseman, GSW has no need for Edward’s. But I also think either could go against the grain because it makes trade deadline sense more than draft day sense. 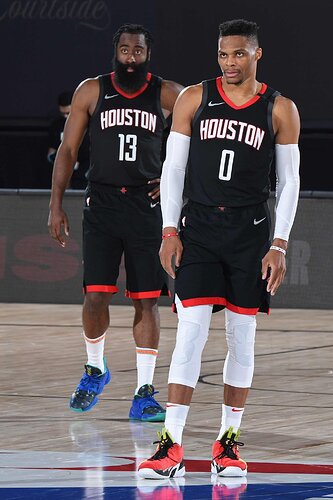 Rockets “feel no pressure to trade Russell Westbrook or James Harden, per @espn_macmahon - They want a young star and massive amount of picks for Harden - HOU wants young talent or first-round picks for Russ”

If this is the case then we are clearly miles apart on what a fair deal would be. Hang up the phone because there is no deal we could come to that would be fair on our end.

Geez… and break the phone into pieces. Not interested in giving up assets to get him.

It’s hilarious how they back themselves into that corner when pretty much everyone said there was no way they were gonna win with that roster… then both guys demand trades publicly and completely undercut any possible leverage they would’ve had, and they think they can make demands of other teams for them lol. They’re gonna be real disappointed.

No Russ, please no. We’re one season away from having a very clean salary cap. We’ve endured the Batum fiasco, please not this.

Non related. If the kid from Georgia is available at 3 and we don’t take him, I’m going to implode.

I think it is a fork in the road type moment. If they pass on russ, they have to keep the cap clean with any long term money that doesn’t come with picks. Essentially commit to being competitive (russ) or commit to rebuild/youth movement through the draft or cap type trades 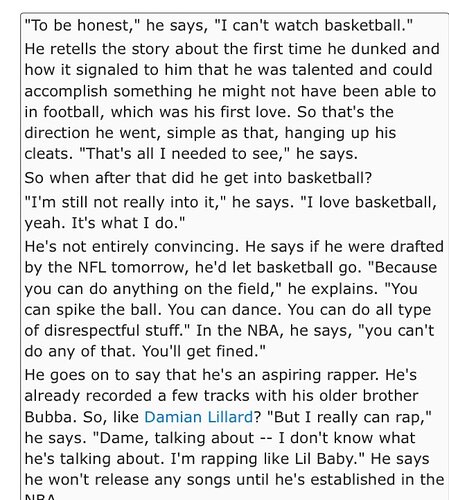 "I’m not really into it. I love basketball, yeah. It’s what I do." - Anthony Edwards on basketball (Via @XinNBA | h/t @TopBallCoverage )
← previous page next page →