I didn’t say as an omniscient being it’s empirically the best possible maximizing of future earnings. In fact, we don’t know that because the extension makes him an UFA at age 28 with a possible 30% max vs 25% today so that’s completely still TBD).

But 91m is indeed life altering money. And for your 2nd contract that makes you a UFA at 28 and absolutely avoids the risk of getting injured in your “contract year” this past year, that’s a smart move. The question is why didn’t WE see that as an option instead of offering him a paltry 4 year 60m contract. That’s the gaffe here IMO.

But not for a professional athlete who has put his entire life of blood, sweat, and tears into reaching the pinnacle of his profession-which would be qualifying and earning a max contract. That’s a pride thing. And miles wasnt about to turn down the opportunity for a max level deal after coming this far.

Miles hasn’t come this far by settling. There’s no way he was going to settle for less than what he could potentially earn from all of his hard work-a NBA max deal.

Too bad we couldn’t have to just offered him like 4 for 80 million. But I wonder if he would accepted that. That’s a perfect amount for what he is now. But I’m sure now he’ll demand closer to 25 per year.

Man… 100,000 a season would be life changing for someone like me. haha

Yeah its not like Kemba. I believe it was also already out that Kemba’s knee was arthritic as well when that time came to re-sign him. We were all upset because of the sentimental side of things, but about a year after that fisaco, it became pretty clesr it was the right decision, and mainly because of his knee… with Miles, as you said, he’s young, still developing, and can potentially get better… it’s no question we should bring him back.

I heard on locked on hornets today . They said thet we not going to pick up Oubre’s contract. They said it gives us 7 million more to give to Bridges and Martin in thair contract.

Spotrac has him guaranteed fully on 6/30 so that’s short time to try find a deal for him.

Detroit traded for SF Burks and another C Noel, take them out SF Miles & C Ayton.

Knicks paying Brunson or somebody

If DET want to, they can free up that space, but doesn’t seem they want that. I think the rumor they wanted mid level contracts to fill out their roster following the draft is proving correct.

It’s definitely looking like we will get a good value for Miles at this point. I’m still hoping for around 4 years, for 80 million.

I did just see the Knicks plan to offer a 4 year $110 million dollar deal to Brunson. That’s nuts to me. Scares me that we’ll give Miles that also. Way too much.

I took that to mean we was just going to realease him . Paying him five million and letting him walk. And useing the money to sign Bridges and Martin. They said it give us 7 million more to sign a vetran free agent. But you right 6/30 is the last day they can do that.

Yeah if Brunson is getting nearly $28M a year then Damn! Miles should feel like he deserves to get the max.

And that same team had LaMelo on it, didn’t it? Miles might not be quite the same as far as upside, but he’s still a great young prospect. He just turned 24 earlier this year so he still has plenty room for improvement.

this is the last year of the batum contract

Pacers are ones to watch

Who in the heck WANTS to play in Indiana? Seriously you don’t go there unless you have to.

Yeah if Brunson is getting nearly $28M a year then Damn! Miles should feel like he deserves to get the max.

Yeah that is a crazy amount of money for that dude. But we have watched the Knicks suffer for YEARS to find a PG. We could be living that hell now if the GSWs were not dumb@sses to pass up on Melo. I think that the PG position is critical to any kind of NBA success. So yeah if you think that Brunson is the answer in NY then overpaying for him may be the only option.

I am glad Melo didn’t end up in GSW, can you imagine all that room for Steph and Klay to play with so many pass and shoot opportunities? I think Melo fits really nicely in CLT, and hopefully he will be a CLT legend with championships in 18 years when he retires.

ups Miles potential 4 and 5 year max contract numbers but only by on the margins.

Charlotte has also signaled it will match any offer for Bridges. So any interested suitor would be incentivized to throw the 24-year-old forward his four-year maximum in order to force the Hornets’ hand. If an offer sheet never comes, Charlotte will be in a pretty position to bring Bridges back under $30 million annually. 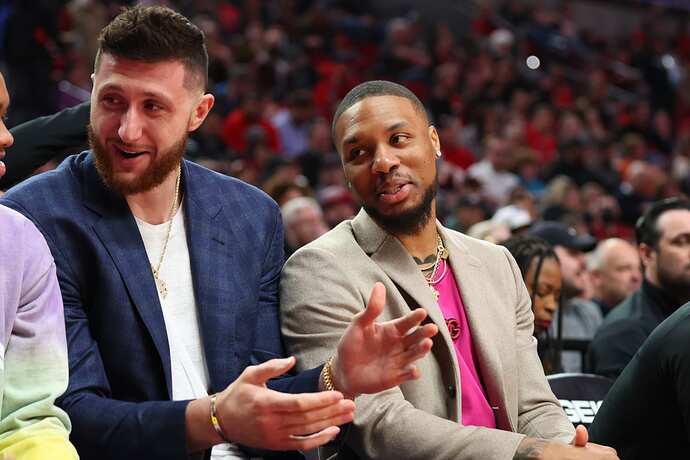 After a weekend in which Damian Lillard appeared to court Kevin Durant via Instagram, the Blazers roster is starting to take shape amid an offseason where...

That last line makes me shudder