Still looks a little lost at times on D, and a bit thin. I take your point though, as Mason offers a pretty low bar.

Even with Harrell poor play, opportunity there but Kai not there yet.
Finish season PJ & Montrez splitting backup center minutes this year, but next much more positive outlook than Kai gave us early and cross fingers ready next.

Kai has the package of a PJ/Montez combined skills set…at 7 foot but lighter and inexperienced.

At Swarm game tonight will post my thoughts, so far Kai Jones has no business being in the G League lol

I agree, he’s not ready yet. He needs to refine his game and gain more confidence. Next year, though, I expect him to get consistent minutes. He’s just that special. No one but Ball has the kind of potential he does.

I think Kai could be a significant contributor to this team right now. After seeing them both in action last night, he is much more ready for the league right now than Bouknight.

Kai is so special, and he is so perfect to have next to Lamelo. While I agree that his defensive awareness needs improvement, he would get 10 pts a game off of lobs alone with Lamelo. I salivate thinking about those two playing together.

Kai was the best player on the floor last night in a game where the other team had many guys that have played many NBA minutes.

As for Bouknight, we have killed every bit of confidence he had, it is visible in his body language. Constant head shaking, not moving on to next play, he may have the worst body language of any player I have ever seen.

His shot is still flat, but really pretty. He can obviously jump out of the gym, but it seems he is hesitant to use his jumping ability all of the time.

Its almost like Bouk is trying to look cool out there. He was pissed the whole game, did not feel his investment into the program there like I felt with Kai.

I have been concerned about Bouk but I would say I am “a little worried” (gangster lingo).

Its not all on us either, there are some things going on there. I just see how much Kai has improved with a Buy in to what we are trying to do, and it seems that Bouk is slipping behind.

Also, I didn’t really notice Thor out there which is strange considering he is the guy that has the most NBA pt of any of them haha

Appreciate the perspective. Thanks.

I’m not sure how we know that he isn’t ready when he’s never got meaningful minutes. Not saying he’d be an Allstar right now or anything, but I bet he could have some big games and learn even faster than he is now.

Watching the Swarm on NBATV. Kai needs to be in the damn lineup right now

Well this was good to read! I had no idea that Sky Kai was doing well w the Swam!

Is it me, or does Kai Jones already look bigger this offseason? Even his face looks “fuller” as if he’s gain weight. Anyone else notice this?

He has reportedly put on at least 20 lbs since he got drafted, I think that # is conservative.

He is looking strong, hopefully he will provide a back-up center qualities, so that we don’t need Montrezl or Plumdog.
https://www.instagram.com/p/CeJ7CRtvhg3/?utm_source=ig_web_copy_link

Wow. So my eyes weren’t just playing tricks on me? You know where it’s being reported?

I can’t wait to see Kai out on the court next season. The number one thing I’ll be looking at is his ability to guard on the perimeter. If he has the athleticism to do that, he becomes a HUGE weapon for us as a 7ft’er who can’t be easily schemed off the court by the opposition going small.

Giannis light, here he comes. I want to see him play big minutes.

Revelation considering other pick. Could not stay on court early (hornet or swarm) w/o fouling, TO ball, tripping over self…one of bigger in-season turn arounds seen. Cannot be out of rotation this year…no pressure Kai! 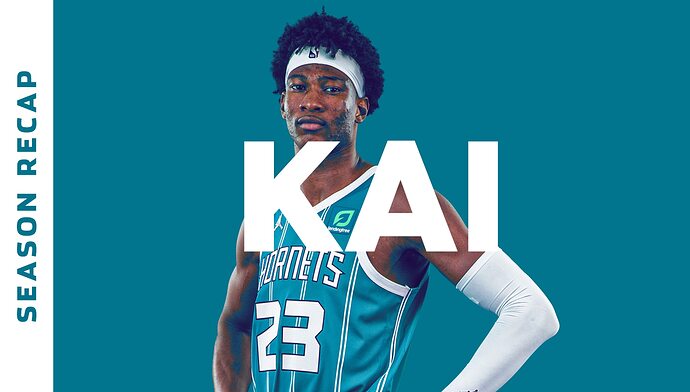 It may have been largely a developmental season for rookie Kai Jones, but what he did showcase on the floor indicated there’s plenty to be excited about surrounding the long-term potential of the uber-athletic, bouncy big man.

“ I bought in out of the gate,” he said. “I love basketball, so once I was told about the opportunity to play 30 minutes (in Greensboro) because I wasn’t playing up here (in the NBA), I was jumping. I was so excited and ready to go. It gives me extreme confidence. Coming in, I believed I could have an impact on this team on both ends. Now, it’s just that I think I can have a greater impact. I know there’s no ceiling for me. Just continue to work.”

For good reason we talk a lot about picks 13/15 and/or spend other resources on a center.
How strong Mitch likes Kai/Nick really affects this, especially with a tight cap.

Mitch loves Kai, he loves Bouk as well. He thinks both of them and maybe even Thor will start for us over the next 2.5 seasons according to something I heard.

Also, Mitch had Bouks back when the whole tantrum went down. He believes in our guys

It’s not really a surprise though as, essentially, Mitch believes in HIS guys … as he drafted them.

I think Kai and Thor were good picks. It’s Bouknight and his skill set, rather than skill level, that has me concerned. I don’t see how he fits into the rotation as he doesn’t complement either LaMelo or Terry.

Sorry to be repetitive, but I want to see one of Bouknight or Terry moved.