One interesting footnote I kept thinking that everyone seemed to be ignoring after the draft night trade fiasco, was aside from the obvious - we enabled Detroit to save money to throw at Miles by giving them a young center so that they don’t have to pursue Ayton - many left out the fact that Detroit is Miles’ hometown team. So not only did we enable them to offer him beaucoup amounts of money that will likely scare MJ’s cheap ass from matching, but he has even extra incentive to sign with the team that we helped because he’s from there.

I swear our teams are headed by fuging idiots. 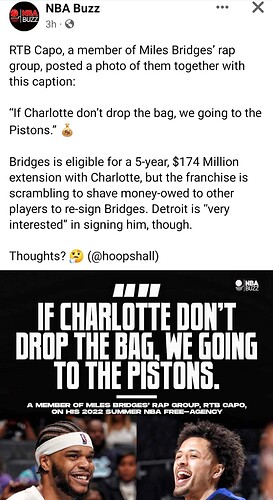 And he was spotted with Melo recently working out. I wouldn’t read too much into anything at this point. Miles did say that money wasn’t the only thing he valued. We’ll just have to wait and see and hope for the best.

Who knows what amount the bag is? I don’t want to say who cares about what some random rapper says, but really outside of garnering clicks and social media attention, this is nothing.

When it comes from Miles, then that’s worth some consternation. Miles is in a good spot, y’all ever thought he was ready to win? That shit ain’t happening in Detroit anytime soon. The same team we’ve owned for like 5 years.

I always appreciate your measured approach to things, clt, especially incontrast to my propensity to rage (mostly only online🤣)… but, Miles also apparently wiped the Hornets from his social accounts today. I know that so often is a leverage ploy in negotiations these days, but it really is troubling the way this offseason has played out thus far, and it doesnt inspire much confidence in what us to come, imo.

And honestly, as a young player, it’s my hometown team. I’m pretty sure his rap group is based there, so you have the pull of those guys wanting you to come back. Honestly, I’m extremely impressed with what theyre building there under Weaver in a very short amount of time with a super talented young core now. And, again, the Hornets just really incentivized them to offer Miles big money with the draft day trade.

It’s very concerning, to say the least. And even if he doesnt leave, and we make sure to match any offer, we likely made it much more expensive to retain him than it would have been otherwise.

When it comes from Miles, then that’s worth some consternation. Miles is in a good spot, y’all ever thought he was ready to win? That shit ain’t happening in Detroit anytime soon. The same team we’ve owned for like 5 years.

That’s the one, vital aspect of things I had let slip in my mind. He can sniff playoff success with this roster, his roster. He knows LaMelo is going to be an absolute star, we’re pretty well positioned to be competitive, with good depth and only one or two gaps in the principal rotation.

He knows LaMelo is going to be an absolute star, we’re pretty well positioned to be competitive, with good depth and only one or two gaps in the principal rotation.

Contrast however is that he also knows Cade and possibly Ivey will shine.

But the key here is that it’s all theater until June 30th. What friends say, what is on IG, none of it matters if we arrive right with his agent. If we don’t, then the game is afoot.

Said it before, I prefer not to sign him especially at those ridiculous numbers.

If he goes to Detroit, he probably won’t be seen as a core player the way he is by Mitch. They don’t seem to see the same upside in him.

Its ALLL Miles trying to get the biggest offer from a team that ISN’T Charlotte as possible. He knows we are targeting a Mikal Bridges type deal and he wants the Max.

Either way, tbey want Detroit to drop bank because it means Miles gets to stay in the QC and get paid more.

Reports are that Detroit felt so good about their draft (soooo glad we could help), that they are not considering muddying uo their cap with a big contract. I would still expect an offer to come in, just not max.

Maybe they offer 4 years/100 and we match? I mean I would feel solid about that all things considered

This thread shows why this board is great. I always love seeing passion, even the sky is falling reactions sometimes, because it shows the team means a lot to them. But what’s great is how things don’t churn out of hand into a troll fest like on twitter or fb, but rather can turn into a reasoned discussion.

I feel like Miles wants to stay, but also wants to maximize his value. It’s what any sane person would want, and of course his agents want to get as much as possible. His boys of course would be excited to have a $100M man in their crew, and the 2nd hand fame it would bring to their careers as well.

Miles is a product of social media, so I’m sure he know how it works. Most of the Charlotte “haters” are actually Piston fans pretending to be Hornet’s fans to sour his feelings on home, which I’m sure he can see through (the Damn you hurt my feelings tweet seemed pretty sarcastic to me). And of course he can’t control what his friends post, just like Eastley can’t control any of you hooligans!

The 5th year is a requirement though. That shows we truly value him and want to make him a core piece. If we’re too cheap to add that year, then that would feel disrespectful, and I can see him wanting out.

I think it’ll be more than $25M per, but I actually don’t think Detroit wants to max him. Their core looks good on paper, but we don’t know how good Ivey and Duren will actually be, if Bey will keep improving. I don’t know if they see Miles as the missing piece to take a huge chunk of their cap for a while if they’re not sure how the rest will stack up, if the personalities mix, if their games even compliment each other. We’ll see I guess.

Good player, not great, if that’s what it takes to re-sign him, bye-bye

Mitch said their main concerns in free agency were our own guys, adding they do not anticipate being active with outside free agents after that. Of course anything can change. It sounds like there’s reasonable commitment there.

Also worth noting— in the name of over-reading social media accounts— is he’s still in Hornets uniform in profile pick on both IG and Twitter.

That extra 5th year hopefully a team option, but I’m sure it’ll end up being a player option 5th year.

I’m so with you. I’m not paying a guy 130 over the course of a contract, or 32 million per season who has never even sniffed an all star team.

Same. This is the most reasonable and even keel Hornets/sports forum I’ve ever engaged with. I don’t post anywhere else for that reason. I really appreciate everyone here. It’s a great atmosphere. I think i lightly posted but mostly read when it was bobcats planet. I remember posters like Beagle, and Buckets.

I wish Buckets was here to back my John Collins/Mo Mamba enthusiasm. He loved him some shooting big men.

*Also. I know that I can bring the heat and strong opinion, but I think I’m still reasonable lol.