Same here. Sabonis isn’t the guy we’re looking for and I’m glad we didn’t overpay on Myles Turner. Edit: I am frustrated by the lack of center, but not necessarily directed towards Mitch doing anything inherently wrong.

Where I think Mitch has really stood out is as a talent evaluator, especially in terms of mining second round talent. Devonte, Jalen and Cody all developed into extremely solid rotation players. Thor looks like he may as well. And Caleb was another good find as an unrestricted FA, even though we didn’t stick with him. Finding guys who can contribute virtually for free, is huge. We almost never had that pre-Mitch. I can’t think of a single Cho 2nd rounder who panned out. Mitch has yet to totally botch a draft, which is something that had become an annual Hornets tradition prior to his arrival.

He has been frustratingly deliberate and inactive on the trade/FA front. I think there are moves that could’ve been made that weren’t in terms of addressing the C spot, but on the whole I think he’s been above average. We’re in a much better position now than before he got here and I’m glad he’s staying around.

I went through his transactions last night and it quickly became evident to me that generally, the moves he makes are really hard to refute with some notable exceptions (some I noted above in fact).

But the moves he hasn’t made are what’s at issue. And he’s a crafty guy. The moves you don’t make aren’t as easy to look up in the balance sheet and say “what the heck were you doing here?” - So good on his part. As someone said above, he’s conservative in what he does. And that will begin to wear on fans here if he doesn’t open up the gambling card methinks. 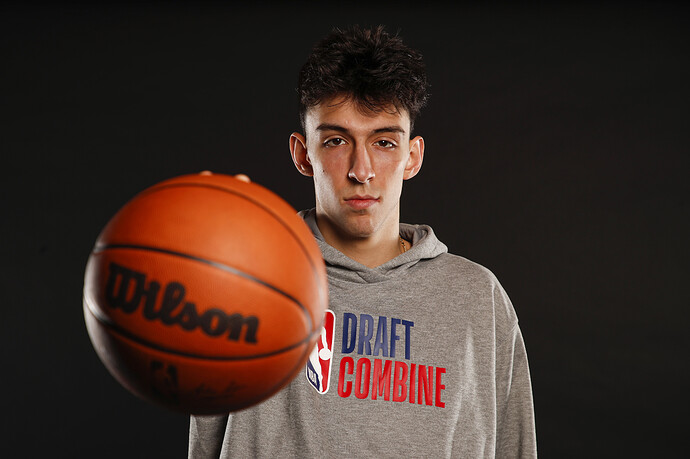 CHICAGO — For the fourth time in franchise history, the NBA draft will begin when the Orlando Magic are on the clock. And while Auburn forward Jabari Smith Jr....

Just for you Powellrmp We should be able to get him fairly cheap.[CLIK LINK TO READ ABOUT MO]

So obviously Mitch isn’t perfect and no GM is. As stated. he’s lightyears better than anyone we’ve had previously. I honestly don’t have frustrations with anything he has or hasn’t done up to this point.

The biggest knock people are pointing to is not addressing the center position and/or the lack of a big slash move. We’re basically 3 years into a rebuild under Mitch (after playing out Kembas final year) and we’ve been to the play-in twice in those 3 years. Our wins have improved each year. We’ve drafted and developed nice talent. We’ve been ahead of schedule.

Teams like Orlando, OKC, Houston, Detroit are willing to tear it down to the ground, endure multiple years at the top of the lottery to collect the highest probability star talent (my preferred approach by the way). But none of this fan base and more importantly our owner is willing to stomach that so he’s forced to take a different approach. We had to get once in a Hornets lifetime lucky to jump into the top 3 and grab Melo since we don’t tank. Yet still, Mitch nor any GM can address every need overnight. You address what you can as opportunities present themselves.

He has addressed the center position by making an aggressive trade to get an extra 1st round pick to draft a prospect he’s identified as having the potential to be a long term solution at center. Based on his track record evaluating talent we can have some confidence that could pan out. It was never expected to be a quick fix and everything does not have to be / cannot be fixed at once.

What big opportunity have we missed out on at center that was worth cashing in assets and devoting a significant amount of our future salary cap to? Injury prone Myles Turner? I’ll pass… Richaun Holmes? Hasn’t proven to be a mistake to pass on so far. You can’t fault Mitch for not making something out of nothing. The right opportunity and player had to present itself and I don’t see anything egregious that we missed out on.

I agree that this may be the time to make that big move but for me I still see the opportunities to get the type of player worth using a significant amount of assets on (I.e. both 1st’s and other key rotation players) as slim. Pretty much Ayton or bust for me. Really don’t want Goberts contract. So outside of that I’m fine with a continued measured approach, add a Mo Bamba type with some upside at a reasonable contract, add a mark Williams and/or best available wing talent in the draft and continue to develop the young guys we have in the pipeline.

Lots of great posts on Mitch and his approach. The only thing I’ll add is, I want everyone (MJ, Mitch, Coach) to be operating on the same timeline and for us to recruit accordingly.

I too am fine with throwing acceptable assets/money at Mo Bamba. He’d be a huge upgrade on anything we’ve had and allow us to actually play an effective defensive system, where his rim protection gives others license to aggressively defend the 3 point line. I’d also be happy with Mark Williams in the draft, assuming he’s there at 13.

The point is we need to move on from pure talent acquisition towards filling needs with talent. A case in point being selecting Bouknight … a clear BPA pick whose skill set doesn’t fit what we need. Not surprising he didn’t play much with a largely redundant skill set, on this roster.

We need a lengthy, 3&D SG who can guard the opponent’s best Guard. In other words, a better Cody who can play with LaMelo or play with Terry/Bouknight (pick one, move the other). We need the same at Forward (a Covington type and that’s why I love Sochan for us … he can guard 1-5). Finally, we need a starting centre and a backup PG who can defend and, therefore, occasionally play with LaMelo (I love Dyson Daniels in the draft for us too).

We have 2 first round picks, two expiring contracts with minimal guarantees and some talented upcoming RFAs with which to accomplish this. Mitch has the ammunition, does he have the balls?

Moves Mitch can do to have a great off season.
1st We trade Plumlee and the 15th pick for Mo Bamba and the 32nd pick Sign and trade .8 or 9 per year can get this done.
2nd Holmes wants out bad sitting the bench now. Oubre the 32nd pick and the 45th pick out . In Holmes They do this to move the long contract
3rd we pick a Daniel’s Type with our 13th pick
4th We sign a veteran pg with the min .Good 3 point shooter.
We then have this line up
Ball’ Terry, Miles , PJ , Mo Bamba , Terry , Martin, Hayward McDaniels Holmes. ,IT, Thor Bouknight. Kai. 13 players of which all can play in the rotation . A very skilled and very deep team. This team would be close to the 149 million But i think we can get it done
Batum comes off the next year9 million
If we keep Washington We could offer him up too 16 per year.
Last Melo’s contract, Hayward comes off an gives 30 more million to sign Ball
Line ups would be sit by the coach. But i think we would be one of the deepest teams in the league.
last We pick the best 3and D guy we can with the 13th pick Daniels might fit well hear

Oh I’ve read that one

. I’m really looked into Bamba for some time and I’m planting my flag on this hill even stronger than the John Collins hill from last year.

What do y’all think about Valanciunas+Graham for Hayward+2024 1st?

I think the ideal scenario is Bamba+Cannady for Hayward+2024 1st, but I would take Valanciunas too. I feel like, both these scenarios are a free pass off of Hayward.

Hell to the hell no on the Graham contract plus having to give up a first. I like Valanciunas but Graham is what he is at this point IMO. Low percentage long range bomber with not many finishing skills inside of 18 feet.

I think we could find better value elsewhere or just keep Gordon and try to capitalize on his expiring next season vs this.

Yeah, I don’t like Graham either. Better off with someone else, but Gordon’s value is really low with his unreliability.

I just don’t like the idea of giving up pieces to get rid of Hayward. This is not a Batum situation to me. When Hayward plays, we are a much better team. I know he’s always hurt but I don’t think we need to give up assets to get rid of him.

Yea, I’ve come to this conclusion too. The concern is obviously that it’s harder to resign Miles & Cody, and we’ll surely be unable to resign PJ, maybe McDaniels too.

I didn’t like it when we signed him, hated it when I found out we’d have to stretch Batum, and detest the opportunity cost we’re now saddled with.

You can strikethrough everything you said except for “he’s always hurt”.

Trust me, you don’t have to convince me we’re a better team with Hayward on the floor.

I agree that we should not give up assets for a Gordon trade. Its not the same as some other big $$ deals in the league, and his injries have kinda been freak things not because he is “injury prone”. The main issue is that he had to sit out 20-25 games in consecutive seasons for 10-15 game injures. I am concerned that his body doesn’t heal properly at this point and that is more concerning to me than the actual injuries he has incurred.

I agree with you. He took so many games off, then came back for a short game which agitated his injury immediately, making him miss more games. At this point, he feels like a glass man. I understand his value, but he is not a star/game changer at this point. If we can keep only 2 of 3 (Terry, Miles, Gordon) to be able to sign a center, I would let go of Gordon first. I feel that he is the first removable piece from the team.

Love as 6th man would be interesting. That is the role he wants. He was phenomenal last year in 20 mins per game. #s were off the charts.

But would we have to pay Cleveland for Gordons extra year?

Love would be fantastic as a second unit organizer.

I would be thrilled with love for Hayward straight up.