I think you draft Williams (the better capella and long shot gobert). Trade for Collins using Hayward (and if they Atlanta smartly declines miles as a sign and trade). Last chance for pj.

Got to admit, a Big pairing of Collins & Williams, with Kai able to play both spots, is enticing.

John Collins WAS my fascination prior to Mo Bamba after all. Collins and PJ feels pretty redundant. They’re similar and different. PJ is the better defender. Collins has more offense and is more athletic. I’ve been a critical voice against PJ, but I’ll give him credit of pulling it together towards the end of the season. I saw a lot of good defensive work actually.

Hayward and Rozier would be perfect fits for what the Lakers are needing…I’m so down to dump contracts to have one year of Russ Westbrook. We’re not a top 4 team in the east this year or next. We’re not making the finals. Dump salaries and start fresh for prime Melo years. People are getting way too invested in winning now. I just don’t think it’s going to happen.

PJ can back up both. I see Collins as quite similar to PJ. Collins is a lesser defender with more offense. And more athletic. I see PJ Washington as John Collins lite.

I think Miles starts at around 22 just a little more than Collins who started at 19. Five years at 25 is fine with me. Just asking is MJ wanting to stay under the luxury tax? Or is he staying at 122 the regular tax, If it’'s 122 it’s no way we can even be competitive at all. If he’s going up to 149 we can get things done. We as a team are 27th out of 30 in what we pay. MJ needs to at least pay Miles and the draft picks. And go up to 149.

MJ needs to at least pay Miles and the draft picks. And go up to 149.

I think he will, if we don’t unload some salary. LaMelo being here changes the potential trajectory of the team.

I agree with that . We don’t have to have Melo money right now we should wait til next season to extend Melo and add another all star type . W e will have about 51 million come off next season to make moves. That’s if we make no moves now. Melo will command around 25 of that starting at around 35 . That would leave us around 25 more for another player
If we could find good value right now then i am for that all so.

True but we can do his extension next season even if it is a max. The new contract wouldn’t start til this one runs out.
Miles turned down his offer last season and bet on his self and won.

You answered your question with your last statement.

Melo’s camp is not going to do the Hornets any favors and by signing early so that Melo can take less money. He’ll be signing for the mega max when he’s a RFA for the 2024/25 season.

Scratch Portland off the list for Miles suitors? But Detroit is the main threat now to offer miles a max deal now that they’ve cleared grants contract…. 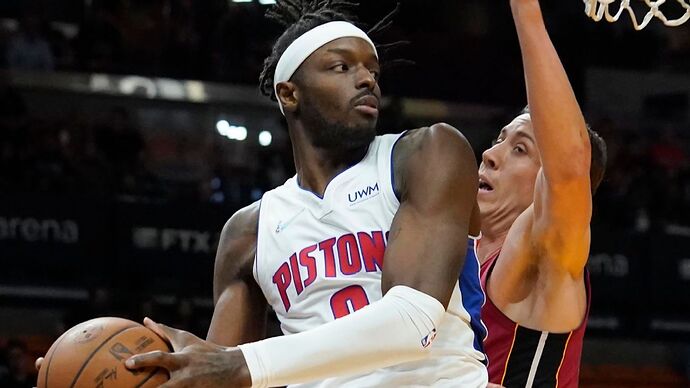 Sources: Blazers get Grant from Pistons for pick

Miles is starting to run out teams that can sign him to a max . I am thinking Mitch will just sit their and wait . And only match at the last second. We might get him cheaper than we think.Damn we need something to go our way.

I don’t want to mess around too much on Miles simply because of the fact that Klutch has low morals when it comes to negotiations.

I also have several guys that I would be cool with drafting so I am not that stressed.

Have to say though, I have a feeling that this could be a draft to take risks

I really think the Pistons plan A. Is maxing Ayton and Woj just said the Suns don’t view Ayton as a max player so they likely wouldn’t match.

If they do that I don’t think they’ll have the money to sign Miles and I don’t know what other teams would. As Portland now doesn’t have the money.

Not sure if I have posted this, tweeted this, or just lamented this internally (seems like 1 or 2 has at least happened) - if we trade Gordon Hayward AND burn 2 FRPs to do so before Nic Batum’s dead money comes off the cap sheet, I will absolutely lose my mind.

That might be more malfeasance than hiring Stiff Clifford back and forcing him to use Borrego’s assistant coaching staff while turning over coaching duties of the Swarm to the Amazing Sladek.

Exactly why it won’t happen. Hayward isn’t Batum or Parsons

I could now see us going after Mo Bamba as our starting center. Between him and Williams we would be set at the center position. This will give Williams someone to battle with for a couple years.

Who do you reckon we will trade? Mason or Kelly? There is no need for Bamba + Williams + Plumdog + Jones + Richards.