Moses Moody, James Wiseman, Kuminga and Warriors 1st Round Pick in 22’ and 24’ for LaMelo and Richards?

LaMelo eventually being wanted to be traded to the Lakers is going around! What could we get for him now? Maybe to the Warriors for their young kids?

Take it easy. It’s Year 2 for Ball. They’ve got him for two more years, and then almost certainly another four or five on a max contract after that. Lakers fans will tell you everyone eventually wants to be traded to the Lakers. If Charlotte still hasn’t figured things out five years from now there will be a real conversation to have about trading him then (and the front office would deserve it).

MJ trades him to lakers for lebron.

then demands he sits so that he can’t pass kareem for all time scoring and starts every home game with a montage of lebron going 4 and 6 in the finals.

I guess one thing that could pop in favor of those teams wanting to extract Bamba from ORL is if ORL jumps to number 1 overall in the draft. Or if they are able to draft Chet with their first pick if he drops to where they end up drafting (which seems likely)

I watched him for 5 minutes in a game vs St Mary’s or whatever the #2 wcc team was. I don’t see it. My immediate reaction was that dudes a bust. What the announcers kept praising him with I just couldn’t see it.

Holmgren? I don’t buy any pre draft super buzz anymore. Each one of them is likely to be really a great NBA player, which by the standards pre-draft applies to them, they are busts.

Yeah. I just don’t see it with him. Maybe 4-10 picks. He just screams something like hasheem thabeet

Trade an all star for more “upside” rookies who can’t win? Plus a busted “upside” guy in Wiseman? You should love Houston Rockets because they will be drafting “upside” guys in the lottery for the next 5 years.

Holmgren definitely has skill but he has Durants frame (18 year old Durant). He is going to get destroyed physically in the league early on, but he is too skilled to completely bust.

I do think Bamba is one that could be made available for the right price, or indeed in the right draft scenario. He literally ticks every box and has really started to hit his stride as a player.

PJ, Bamba, McDaniels, Thor & Kai is quite the promising Big rotation. Add in a knowledgable semi-capable vet (maybe Trez at the right money?), and we’d be set.

He literally ticks every box and has really started to hit his stride as a player.

I don’t have much of an opinion but I’m curious if given him and Mitchell Robinson to choose from, would we (the org) ultimately prefer the boxes Bamba ticks over Robinson.

speaking of the knicks, would it be even logical to think about julius randle? his contract is yeesh. but his production at that position and where the points come from is something the hornets desperately need. he is extremely durable over the last 4 years.

I’ve been reading Magic fans thoughts on Mo Bamba, and there are some serious negatives mentioned.

I’ll freely admit his positives (rebounding, shot blocking, was a reasonably consistent 3 point shooter last year) - and he’s better than anyone the Hornets have had in quite a while. My concern is that overpaying a guy like him would be problematic in the long run. Also imagine LaMelo getting sucked into his bad habits like not always giving effort. Not sure that’s a guy we want on the team.

I don’t have much of an opinion but I’m curious if given him and Mitchell Robinson to choose from, would we (the org) ultimately prefer the boxes Bamba ticks over Robinson.

Good question, as we don’t definitively know what they value most at the #5.

I’ve been reading Magic fans thoughts on Mo Bamba, and there are some serious negatives mentioned.

This is great intel as I’m simply going on what I have seen of him (very limited sample size) and the production. Completely agree that where questions exist around motor, professionalism etc. then we need to be careful.

Rafael Barlowe, who took the reins from Chad Ford on NBA Big Board, spent a bit of time talking about him last week on one of his pods. Complimentary of him as a highly intelligent and very curious person outside of basketball but not considered highly committed to basketball. That seems to align with those comments on consistency.

Yeah that’s really interesting. That’s what I was saying, he’s intriguing and I would like to have him but he’s far from proven so I’d be hesitant to throw a lot of resources or money at him. Just still seems like lots of question marks for him to be this far into his career. If Kai is still this inconsistent after four years everyone will be calling him a bust…. Again, I’m not saying I don’t want Bamba. I like the idea of his upside especially opposed to some others mentioned but if we’re thinking he’s the vet to throw all these picks at expecting immediate and definite success I’m not sold he’s worth that. Still seems like a bit of a project to me. But this sheds some light on him.

He definitely isn’t the finished product, no doubt, but he is an ascending player with all the measurables you’d want. Prior to this season, which saw him start 69 games, he’d only started 6.

He’d instantly be, by far, our best rim protector and rebounder. He would be a risk, absolutely no doubt about that, but one that might just be worth taking for a 23-year-old double-double Centre, with 2 blocks a game, a +ve AST to TO ratio, who also shoots the ball very well for his position (48%, 38% & 78%).

However, @Vanderbilt_Grad’s post did raise some serious questions about him. We’re in a tough spot but, eventually, we need to roll the dice, and I’d rather do it on a 23-year-old ascending player than an injury prone 30 something, earning 30 something a year, for too many years …

When is Bamba’s contract up?

Not a fanboy of player and possible deal

But if don’t pay RFA Miles, can see FO jump on this comparative “deal” 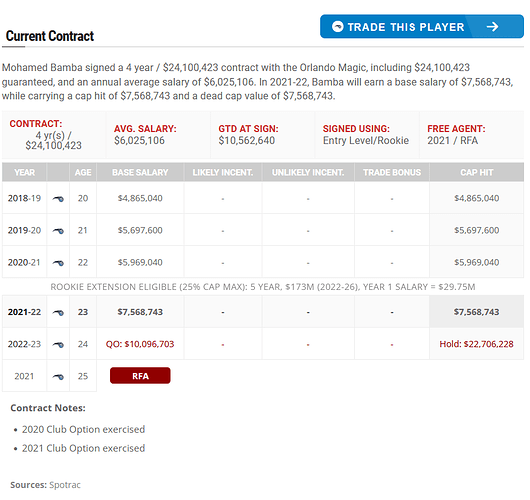