Not watching, but numbers looking nice for
Williams, Kai, and Thor. Hoping for a nice finish. 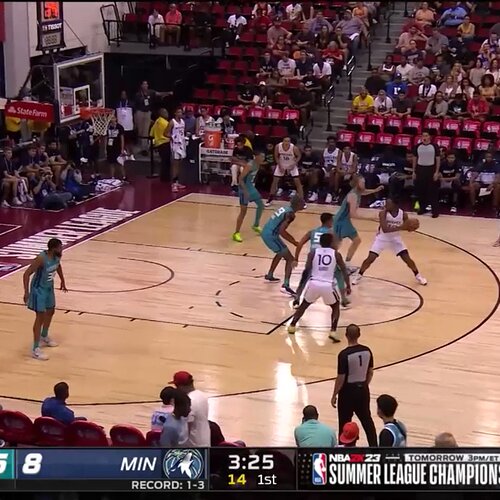 I think this young brigade is looking a lot more organized this game. Hopefully they will build a nice swarm roster that can help us if we are in a tight place

That Williams block at 28-18 was nuts. How he keeps those in play and in his control reminds me of Duncan in college.

Again not watching, but love the idea of a guy that not only blocks shots, but does so in a way that leads to change of possession.

Did we give up on LiAngelo Ball?

Are they trading LaMelo for KD? /s

It wasn’t like some insane level of athleticism but just a great help defense block that seemed to me like no one else ever had a chance to get ahold of. He completely controlled the ball from the time he went up for it until the run out.

Bryce has been a disappointment this first half.

Thor’s dunks today might not be high in number but are (big) in destructive power. Bringing that hammer

Second verse, same as the first. And adding insult to injury with the take foul. He’s pressing too much

It is strange cause it seemed like liangelo played well last 2 games. For him to log 0 minutes in this final game is odd

As the guy wanting Minott at 45, that we traded a SRP to drop to 40 to get Bryce so that Minny could pick Minott at 45… kinda frustrating

On a positive note, been good to hear a familiar voice. Ashley does a good job. Think the Hornets have one of the best, if not the best, broadcast crews.

100% I love Dell and Eric are amazing, and Ashley is great. Other crews I have tuned in to are very mediocre compared to ours.

Feel like he’s been the most competent or there today by a decent margin.

Kai just has to learn he doesn’t have that game. Same mistake he has repeatedly made. Bummed for him but hopefully he can learn from that as it was such a film moment with consequence.