They are, which is why their importance wanes once we trade them unnecessarily.

LOL and if we’re lucky enough to land a coach that will play him, that would be peachy 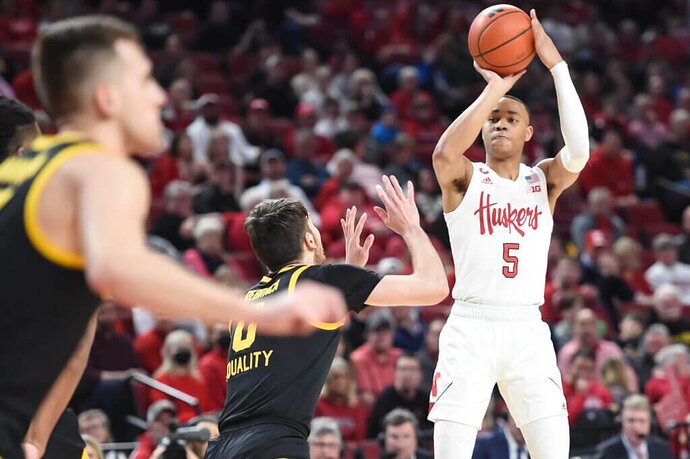 What the Charlotte Hornets are getting with Nebraska's Bryce McGowens

The highest-ranked recruit in Cornhuskers history lived up to the billing in a standout freshman season.

Overall the value shit is what it is, we have to look at what we got now and roll with it. Resign Miles and get a knock down shooter with our MLE money

I like both picks, don’t get me wrong. But I cannot fathom the pick management. Don’t mistake that as the heavy driver of all this vitriol. I’ll be fine in 12 hours … unless we then have a Stifford drafted to the Coaching position.

I am highly nervous that we incentivized DET to not pass an RFA offer sheet to Ayton by passing them a F/C in Duren. And that leaves us exposed to a threat on a Miles’ offer sheet. If we have that stuff nailed down, then no worries here.

If we can land Alondes as a UDA by night’s end, I’ll be quite happy with Mark, Bryce & Alondes.

We’re the Hornets. You already know we dont have any of that shit consideted when we just further fucked ourselves tonight. Mitch or no Mitch… we just cant seem to outrun who we are.

I really feel like we could have at least protected our future a little more, in case we lose Miles and used that 13th pick for a SF. If he leaves, this is just awful.

I’ve felt really good about our drafts these past few years… and was super happy with this one for 30 seconds. Seems we have lost it.

I’ve got to go to bed and hopefully not wake up to us signing Clifford, and not seeing our young guys see the floor next season.

That future first is still draft capital at least. People were ready to dump 13 with salary. The future first could still be used in a sign and trade for Bamba perhaps or in a salary dump as some would prefer.

Ok, @Plowright, who left us for the big times, did have a sunny summary for those feeling the doom and gloom

I was expecting the 2nd round move, not sure necessary, know as much about this guy as I did Cody Martin. Would have been fine with Kendal Brown at 45. Or stick go with one my first mock alondes Williams.

Man, feel at 13 much better talent than 40, more than those lesser picks and one year 3 million cap savings.

Great for him but argh!

Gonna wait to see what happens in free agency, hoping there’s some sort of bigger plan in place

Yep… we lucked into getting the 15 pic via the DG trade and then pissed the 13th pick away for…. reasons.

I think we have a strategy. And I think success is always going to depend on some luck. I mean you win some, you lose some. We’re not always going to get it right but What has actually proven out as a loss so far?

Have we taken an L on the coaching hire? In the PR department yes but who really knows yet. Maybe we hire D’antoni and he gets us to 50 wins. Ok, that would be lucky…

The sign and trade swap of Kemba for Rozier was the right move. You attribute it to luck but was it that much of a stretch for a skilled talent evaluator to see that Kembas body was liable to break down and Roziers’s trajectory was ascending. The sign and trade of Graham for a future first proved to be the right move. Sure it took some luck to net us the pick that it did but 1) it was a win and 2) even if it conveyed as a 2nd it was better than letting him walk for nothing or being on the hook for DGs salary and the Pels are ready to get rid of him already.

Our cap situation doesn’t look great in the present but has it proven to be a loss adding Hayward or resigning Terry to major deals yet. The roster we’ve built thus far has garnered 10 win improvements year over year the past two years. All the rumors of trades and parting with assets to get off contracts so far are just that, rumors. We haven’t taken that L yet. It’s yet to be determined what we can pull off to manage the cap and continue to improve the roster. And I’m still pretty confident Miles gets resigned.

Listening to Mitch speak it seems clear the strategy for this draft was that our rookies from last year didn’t play and are essentially still rookies. Rookies that he (nor I) have given up on and feel that they have every bit of talent as some of the kids available where we were drafting and he didn’t feel it was prudent to use both picks to add too much to the log jam of young talent. The strategy appears to be to get last years rookies along with Williams that playing time and retain a pick as a future asset that could convey as a pick at a time when we’re in a better position to add it to our roster or use it in a trade to improve our roster. Will that be the right strategy? That’s yet to be determined but we can’t exactly say it’s an L yet.

I love Williams and Bryce wasn’t on my radar but from my early look at him and with Mitch’s track record I’m happy to add him as well. I’m just going to see how free agency plays out before I get too upset. But I really like a lot of our players. More so than I could say anytime In recent history and I still think there’s a path for continued improvement for us.

My main sense is that the FO work is not the coherent thing we keep trying to make it. Bryce/13 is a great example.

Is it sound to convert #13 into what should be mid-20s pick and with protections cannot ever be as good as 13?

On its face, no. Ok so how about all the 2nds? Are they valuable?

If no, then we traded 13 for lesser value and that’s not good asset management.

If yes, then one would spend them wisely.

Say Bryce is our guy at 40. Ok let’s make that happen. It costs us 2 2nds to get to him. That suggests he must be quite valuable to us. If he’s valuable, why is he going to be on a 2-way contract?

Either 2nds are valuable or they are not. Either Bryce is worth multiple seconds or not. Those are fair questions. But how this team regards 2-ways does not sync with the value of using 2 2nds to get there. How we used 13 to convert it to a worse future 1st doesn’t sync with the pick’s value.

If this stuff all works out, it will be luck.

There are other teams that just walk in a straight line to get from point A to point B. We seem to drunkenly walk a line drawn by Simpsons animators. It’s great if we find an unopened beer or a $100 bill on our circuitous path but we shouldn’t call that a plan.

Note: I really like the guys we picked. I normally do. I don’t get how we went about it.

You attribute it to luck but was it that much of a stretch for a skilled talent evaluator to see that Kembas body was liable to break down and Roziers’s trajectory was ascending.

Reminder, we offered Kemba $165m. He would have the same two years left today that Hayward does (offset 1 year but a 5yr vs 4). We would be looking at roughly $76.5m remaining on Kemba, not the $61m we have remaining on Hayward.

I think you summed things up nicely there @Eastley. I wasn’t able to watch the Draft live, and I’m catching up late morning / early afternoon, my time in England.

Going in, I had scenarios in my head of us coming away with John Collins and Duren/Williams, or Sochan & Bamba/Turner, or being able to dump salary … not Williams and a future first that is guaranteed to be worse than the one we traded and some seconds!

In terms of who we picked, Williams is a good pick, and I’m happy we got him. I can see him and Kai coexisting nicely into the future as, when a team schemes Williams off the floor, Kai can take over the spot. Plus, the two could likely see the floor at the same time too. So that all makes sense and was good value.

But what the actual fuck was that trade at 13? Clearly we’ve got ourselves into a situation with the cap, entirely of our own making, such that we don’t want to select two 1st round rookies. That’s the only explanation I can fathom. At 13, we had both Centres (Duren & Willliams) a very talented Wing (Griffin), an all hustle defensive tornado of a Forward (Eason) available. Worst way, we miss out on one of them.

I’m at a loss to explain this away. Horrible, horrible GM work from Mitch.