After a night sleeping on it, I think its safe to say most of us feel, at best, like we’re in that period of waiting to see your medical test results, or whether you passed a big exam, or if you got the job you applied for. The terrible queasy feeling of limbo.

This is at best. Part of it is the Duren/Williams pairing. We made a choice, we hope its not an Okafor/Howard path, or Duren isn’t Bam 2.0. And if not the Center choice, we hope Griffin isn’t a new Jimmy Butler or Booker, or Eason isn’t that ultimate 3 and D guy we’ve been coveting, and that McGowens can actually make the roster some day.

Maybe we actually did pick the 2 best of all of the above, but until we see it, that impending sense of “what the fuck did we do” will hang for the next few years.

But… I promise this isn’t one of those justification speeches (no excuse not to squeeze as much value out of 13 as possible), but - this is the most talent the Hornets have ever assembled since the new inception.

Then there’s the young guys who seem to have more promise than most rookies during the Bobcats error. I have most faith in Kai right now - yes, its mostly a vibe, but his energy and passion, which normally isn’t ever enough, combined with his sheer size, skill set, and athleticism, I think it will come together. I have faith in him. Thor seems like the perfect modern wing stopper, but he has offensive skills too. Bouk has a ton of talent, he showed how good he can be when he was in the rotation. Just consistency and getting rid of youthful mistakes, I think he’s in the mix. And adding the really really huge Mark Williams, who if he can impact the court anything like Jarrett Allen, would be huge for us. Plus he has a much better shot than Allen, so his potential can reach even higher than that if things go together.

So yes, we absolutely could’ve handled assets better yesterday. But we do have a noticeable collection of talent, even if it doesn’t fit perfectly right now. I guess I don’t feel its the end of the world for the team yet, even though that chance will always exist as long as Hornets Law reigns supreme.

This is exactly what I’m saying. It’s not exactly the route I would have chosen personally but I can see the vision and understand the strategy that they are pursuing.

And up to this point, the moves that they have made have significantly increased the win totals over the last several years. PROVEN PROGRESS… RESULTS.

We have a core of young players that achieved the progress we’ve already seen and they stand to get better with another year of experience.

Next year we’re essentially adding three young talented 1st round picks in Bouk, Kai and Williams. Many don’t see it that way now cause they weren’t great enough to get on the floor for an NBA team that was in a playoff hunt playing vets instead. But imagine if Bouk and Kai’s G league numbers were put up in college in stead then they’d be even more valuable in this years draft. All I’m saying is dependent on what other moves we make this offseason it’s not unfathomable that our steady progression continues next season. IFFF that happens and with the young group we have we’re still in a good place. And we have some assets still. it’s hard to argue against results and so far the results have shown steady improvement.

This sums up my thoughts perfectly. I haven’t said a lot because I don’t know exactly how I feel yet. Still processing. I don’t know if we fumbled at the 1-yard line or hit a grand slam. But we definitely added talent to a roster that has more than we’ve had at any point this century. Who knows what that roster will look like by the start of the season, but even if we didn’t execute the draft to perfection, I think our trajectory is still pointed up.

Did anyone know this happened?

As it should have been considering the total return. Also Buck pick is protected 1-4.

Im not too concerned with Williams over duren, because I’m not particularly excited about either. But I think duren has the higher ceiling and upside than mark Williams.

But I see Williams has having the higher floor. I guess.

The only way this makes sense at the slightest if if we are resigning Miles. If not, we are pretty much in a full rebuild and have no idea why we didn’t just draft two high draft picks to upstart that. We have to be resigning him at this point…. I’m still mad!

Oh boy I thought I was having a bad day. Now my wife is shaking angry and I’m the one looking for a safe closet.

I agree that is the direction the front office is heading and take on board all your well expressed points.

I just still find it hard to let go from the disappointment of signing Hayward. Not only did we sign an injury prone/plagued player but we’re paying too much for too long for him AND we’re still paying for the fact we had to wave Batum to do it AND it’s cost us a lottery pick when there were ideal players ready to be picked etc.

So pissed off at how this continues to play out.

Great stuff, but it illustrates why I’m pissed off. We have done some good things and have a number of young players on this roster I like and can see contributing next season and beyond … wouldn’t it have been nice to add another one to the mix?

I get it, we wanted to trade the pick for salary cap reasons. The talk of not wanting another rookie is absolute bollocks. It’s about money, see my above rant on Hayward for context, and I can respect that. But Mitch did an awful job extracting value from a lottery pick. There’s no way to sugar coat it.

Is there any way we can confine Mitch to being our second round GM? I like most of what he does there.

We basically just traded DG for $200,000 (which is the difference between 13 and 15) and that’s it. Since we just wasted our pick and used theres. We lucked out to get such good value for him and then we do this. I’ll never understand it

my sentiments exactly. To say I was upset last night is an understatement. Incensed is better. Feels like another misstep and blunder. Which is the theme for this franchse-particularly this offseason.

the hornets can sign my ballsack to an exhibit 10 day contract.

WTF! Is that real? If so, I wonder if the whole fumbled coaching search had something to do w it? The organization ways far too casual about the search and that may have been a bad look.

Bouk fell for all of the reasons we are seeing now.

At least we got Isaiah Whaley! UConn baby!

Yeap it’s real read it on an article in Swarm and Sting. 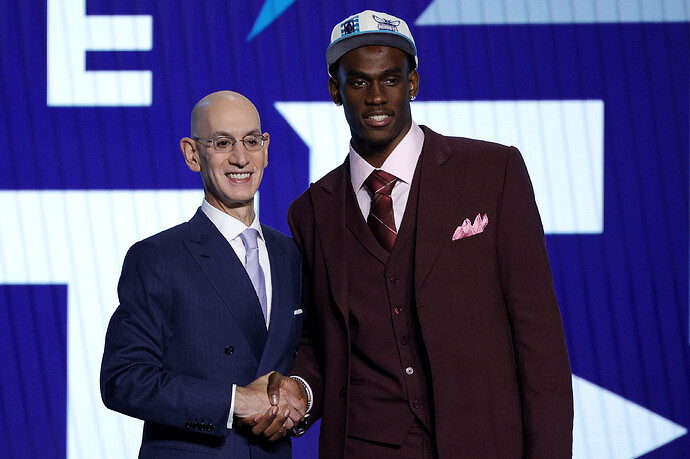 Why the Charlotte Hornets may regret trading Jalen Duren

The excitement for Charlotte Hornets fans was short-lived on Thursday night, as the team immediately traded Jalen Duren after selecting him at the 13th pic...

Has Mitch f-up a draft since he’s been here? I don’t think so. In fact I think that last year was his worse draft and he managed to get Kai AND we got a 2023 pick back this year. We are much better off under him. With that said, clearly the FO thought that Mark W and a 2023 pick was more valuable than Duren. One thing is for sure Williams has more offensive potential than Duren.

A 2023 pick back that is way worse than the pick they had. But good on you to put a positive spin on it.