Mock drafts are kind’ve all over the place on this draft. I’ve seen us getting one of Ball, Edwards and Wiseman each of the different big name mocks

i think it is high time for a buckets chart post on the top 7 prospects.

Of course we move up in this draft. The NBA is hilariously obvious.

It’s Ball or nothing for me. I don’t mind the family, and they’ve been super quiet since Lonzo hit the league. I don’t particularly love the wild, kind of selfish play. But he’s got vision and BBIQ off the charts I think.

Watch any highlight video you want to of Ball, but instead imagine Bridges and Washington on the receiving end of those insane passes instead of a third rate Aussie player. I think he is potentially the spark that ignites this fire. Could also bust… but a guard that big is always useful.

Forget looking at the roster for who to pick. Go with the best player available with the most upside. I don’t think a trade is necessary either. Nothing wrong with depth and not asking Ball to come in and save the world. We got room in the rotation.

I wonder if we should try to get another lottery pick and try to get Onyeka Okongwu instead of Wiseman? I might be willing to trade Monk to NY if we don’t think we can keep him. IDK, I just like Okongwu better than Wiseman for this team.

There’s a couple big stars in this draft, its just hard to figure out which guy that is. If you feel there’s a guy you love, but the consensus order has him way lower, then trade back or just take the risk that your evaluation is correct and take your guy.

I’m just glad we finally get to make the call on the several top tier players we want, rather than hoping someone falls and figuring out which of the leftovers to choose from by the time we pick.

Only player I have 100% put myself in the do not want camp is Toppin. He would fit awfully next to PJ and Miles, plus is probably the worst defender in the entire draft.

I have to tell you guys, I’ve been watching tape for the last three hours and as I look at the top three, Wiseman may be my guy.

I really like Edwards and the fact that we have not had a good shooting guard in Charlotte since Hersey Hawkins, makes me like him more but that kid (Wiseman) has the potential to be special.

Forget the dunks, the blocks, the rebounds… I know it’s a small body of work but I absolutely love his touch. The kid has the potential to be better than KAT or Embiid.

That kid will be shooting three-pointers in no time. 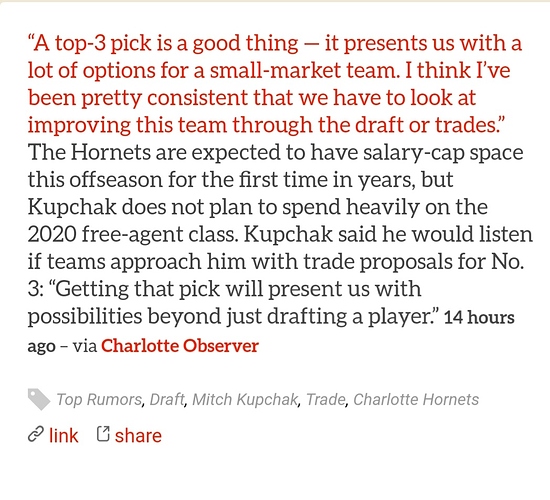 I like that we might be open to doing something more crafty with the pick. Not sure what’s out there but intriguing.

Ah, the beautiful lottery has spoken to us.
Not a fan of Ball, Edwards or Wiseman would be my pick, with Edwards ahead of Wiseman.

For those sleeping on the Australian basketball league (NBL), don’t.
It’s a very competitive league which is quite physical.
The standard has improved tremendously in the last 10 years.

I can’t decide where I stand on Wiseman. I obviously understand the appeal but he just seems like such an unknown right now, and I really don’t think a traditional big man is as useful in today’s NBA. Also he’s not as good as Okongwu right now and I don’t think that can even be debated. I mean if you have a Utah-esque scheme and he becomes your Gobert it’s worth it. If he learns to shoot he could become very interesting, I’ve watched his Memphis highlights from like the one game he played and he dominates but it seems like that is because he’s a half a foot taller than everyone else on the court. What will he look like with Bam guarding him? These are of course questions we will ask with every prospect.

While I have nothing to validate this, I feel like Ball is going 1 and Edwards 2. We’ve heard GSW may like Wiseman, which would push either Edwards or Ball to us. I still feel like ultimately they trade the pick or draft whoever is left of Edwards and Ball, because they are such a well run organization that has already won three championships with just dudes off the street playing center. If Ball and Edwards do go 1 and 2 I think I would draft Killian Hayes or Tyrese Haliburton. I despise Obi Toppin for us.

If you were a guessing man, what do you THINK Mitch’s board looks like? I think I would say it looks something like:

I think Edwards seems like a player both MJ and Mitch would like to have here. Mitch has already said he’s been in Australia which makes me think he at least has intrigue with Ball, but I’m not sure how MJ would like him. Wiseman seems like a guy MJ would like but I could see Mitch being more skeptical. This is just pure gut instinct again nothing to confirm this. But I could definitely see Edwards being the consensus #1 player amongst Mitch and MJ.

Potato, I like you brought him up. I am slowly being moved into the Killian Hayes serious consideration space. I don’t know I am fully there.

I like Okongwu conceptually too. I was watching him yesterday and wondered what our S&C staff can do with a year of core development there.

I am in full pass mode on Wiseman presently. I have no faith that plays out well for us.

I’d hope we explore trades generally, especially swaps that move us back a tier where I’d think Okongwu will be or where I think we could pick up Deni.

Curious what folks think of the draft trade complex looks like right now with names like Randle, Booker (personally don’t see him going anywhere), Holiday (Jrue), D Russell, CJ, etc… that were floated at the end of the pre covid season. Edit: forgot about Heild

I am calling my shot now that Hayes is probably a guy much higher on a lot of big boards than you are seeing in current mock drafts. I won’t be a bit surprised if he is a top 5 or even top 3 pick, and I see mocks with him at the back end of the lottery. I’m not saying I would agree with the take, but if someone came in here and had Hayes as the #1 guard in this draft would it be hard to argue with that? He JUST turned 19 and I can’t find the glaring flaws in his game I see in Melo (and I LOVE Melo) and even Edwards. He shot the ball extremely well in Europe last year and just took a massive leap which is super exciting. He shot the ball better than Edwards or Ball last year, not even a question. He has decent athleticism, great size for a guard, smart passer, etc. I’m not saying he’s the #1 guard in this draft, but I’m not quite sure why he’s so low on some of these mocks and big boards when I compare him to Ball and Edwards.

For the record, I still think I’d take Ball or Edwards over him. But if they’re both gone I wouldn’t bat an eye if we spent the third pick on him.

“A guard that big is always useful”

Hayes has been my favourite player in this draft for months now and not just because he plays about 100 miles from my Hometown.
He is already a good shooter with a nice step back three and great playmaker / passer who’s engaged in defence as well.
He put up his numbers against older (grown) players but it’s always tough to compare his accomplishments as I have no idea how strong or rather weak the BBL is and I’m not a good talent scout either.
What I’m afraid of is he might end up in a Warriors Uni next year, he absolutely reminds me of their style of basketball and could fit well into their future plans as Steph is already 32 years old.

I don’t see anything in common between Hayes and MCW outside of height. 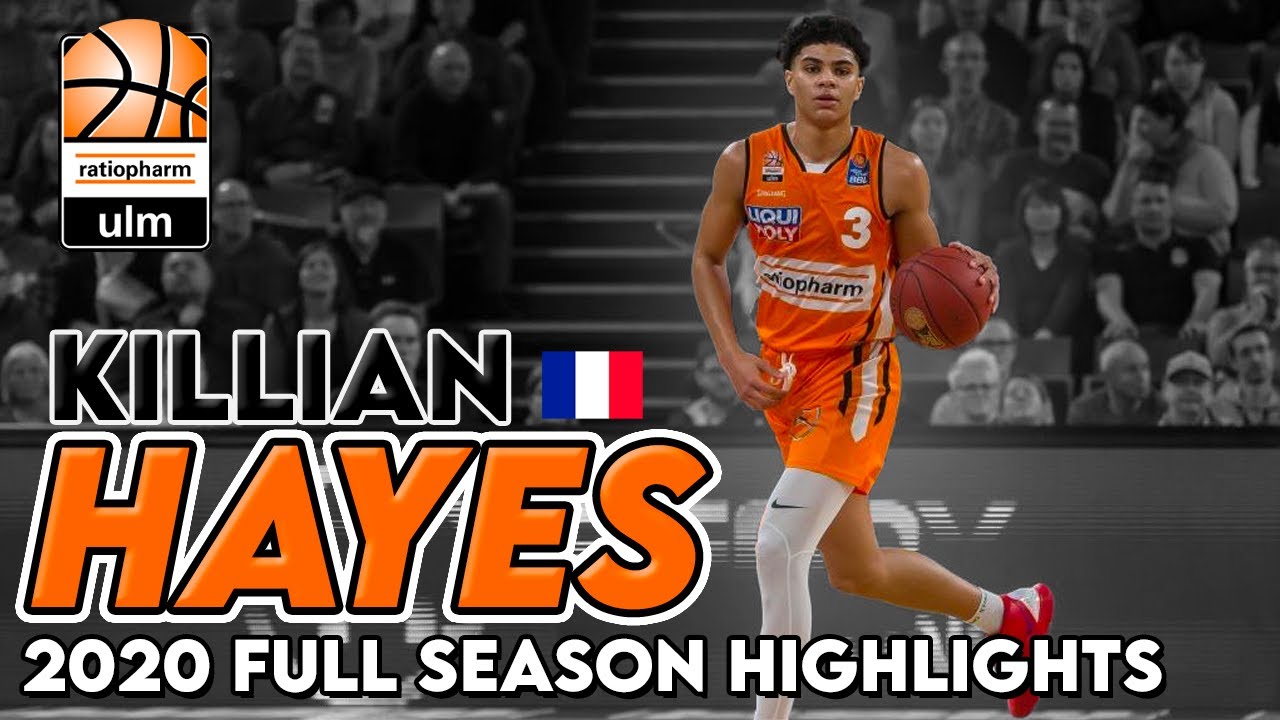 Last I heard MCW was still playing and getting 20 mpg and therefore useful.

I personally want the most currently talented player and I think that’s Ball. Wiseman or anyone else is going to require some strength and conditioning or hard core development to become a star player and I cannot trust this organization to come through on that. We gotta straight up take a risk and get lucky, because organizationally we are a disaster when it comes to development.

Not a fan of spending a top 3 pick on Carter-Williams, “useful” or not.

TBT, I can see a comparison of MCW and KH but I don’t know they are the same player. He seems like he’s got a threatening outside shot and really nice passing touch. Honestly, I like MCW but he’s proven to be a liability only in that when teams make him shoot, he is irrelevant. I don’t know his MPG is of much meaning when it’s Cliff’s stubbornness that drives that.

My memory (admittedly not great) of MCW is that he was defense and could drive very hard to the basket was his MO coming out of (Syracuse?). Only thing I have read that’s concerning is that he’s going to need to work hard on his right. I don’t know the level of concern there but it’s interesting to note. I feel that Wiseman has a lot more to concern me than something like that.

And… I have only been looking at tape for hours, so I really don’t have a clue. Ultimately, I’d like to fall back to the next tier if we can get a Hayes, Okongwu, Deni if we can swap and get some value for our trouble. Very little excites me the more I read on Wiseman, Ball, or Edwards.

Are you talking about me?

I’m not referring to Hayes as MCW.

Specifically in that the stache thinks tall guards are always useful. I posted MCW as one of the many contrarian examples.